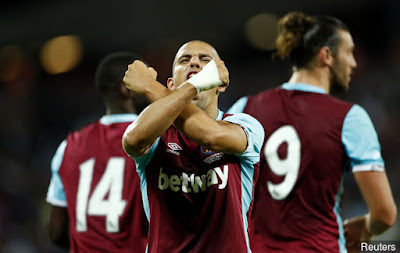 Sofiane Feghouli's return to the West Ham starting XI has been a rollercoaster with a harsh red card, a dreadful miss against Man City and then a crucial goal and wizard-like performance against Palace last weekend. It's clear that as he finds his feet he is increasingly meeting with the approval of the fans.

In an on-line poll conducted by VERYWESTHAM 67% of fans indicated that he should stay at the Olympic Stadium, with 3% suggesting that we should even clone him!

Feghouli's case was further strengthened when David Gold agreed with a fan who tweeted that he should stay and that we have not yet seen the best of him.

Feghouli looks set to benefit from the Payet debacle as he is the natural back up for set pieces and also has the lockpicking skillset that sets Mr Payet apart.

Middlesboro should provide another platform for the Algerian ace to push forward his case at the Hammers.
Posted by Verywestham at 12:32