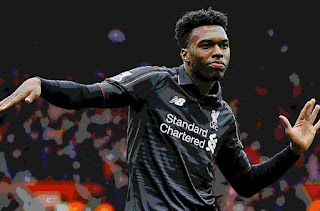 It's been rumbling along in the background for weeks so perhaps its no surprise that the Daniel Sturridge to West Ham rumours have resurfaced with just hours left in the transfer window.

Talksports Micky Quinn has leaked a rumour that Sturridge is West ham bound in search of regular first team football. Having slipped behind Roberto Firminho and Divock Origi in the striker pecking order at Anfield, Sturridge needs to kick start his career.

Injuries and a series of misundersyandings at Liverpool have blighted his progress over the past two seasons and he has managed just 2 Premiership goals in 12 appearances this season - albeit many as a substitute.

Aside from everything else, Sturridge is being denied the opportunity to show off his trademark 'jig' dance.

With gazzillions of cash to splash right now, West ham would certainly welcome the talented attacker and could give him the gametime he so needs AND in his preferred central role.