Here's What Happened the Last Time Payet Went on Strike 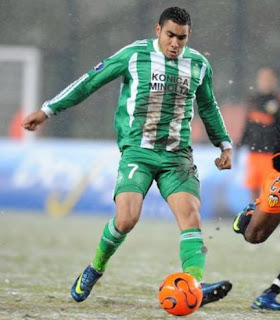 During his time at St Etienne Dimitri Payet was at different periods both a hero and villain. As a potent creative force he was loved by the fans but the relationship was not without ups and downs. He fell out with the club after an altercation with team captain Blaise Matuidi during a game they were losing against Toulouse in 2010 – Matuidi and another team-mate confronted Payet for lacking passion and commitment! Payet expressed his annoyance by striking Matuidi and had to be substituted after just half an hour of the game!

Things became complicated again during the  2010-11 season. Payet began the year in top form scoring seven goals in the first two months of domestic play and by the end of September St Etienne went top of Ligue 1 after a Payet-inspired victory over their big rivals Lyon. Not surprisingly, Payet earned the French League Player of the month nad everything seemed rosy in the garden.

Then the January transfer window opened. As the interest mounted from top Premiership clubs and PSG, Payet put in a transfer request which St Etienne refused. In an interview, Payet claimed that he was the element that would progress PSG to a higher level in Europe (sounds just like his December interview where he claimed to be the ‘missing piece’ in Arsene Wenger’s Arsenal project).

He then escalated matters by refusing to train and was punished with a demotion to the club's reserve team – again a familiar train of events!

Guess what happened next?

Guess what then happened…

Payet relented and over the following ten days made up with the club, returning to play for Saint-Étienne's against Lyon on 12 February. Later, when asked about the affair in an interview, he brushed the whole thing off as merely a matter for the past.

In the following 14 matches of the season Payet delivered five goals and three assists, finishing as St Etienne’s top scorer for the season.


At the end of the season he was let go to League Champions Lille for £6.5 Million.
As they probably say in Marseille: Plus ça change, plus c'est la même chose!
Posted by Verywestham at 03:39