After last month’s thumping at White Hart Lane, Poor Tottenham Hotspurs were left reeling and trying to deal with the psychological fallout from an East London massacre. All over workplace Britain, poor Spurs fans were spinning stories of urgent projects and pressing deadlines as a means of hiding from the good natured break time banter of the “Was it after the second or the third goal when you realised that you were well and truly Hammered?””Do you think it could,ve gone to four or five if the game had continued” etc…….We beat Tottenham 3-0, We beat Tottenham 3-0, doodahdahdah, doodahdahdah…etc.


And as if things couldn’t get any worse, they go and draw West Ham in the Capitol One Cup!!! In such circumstances, who can blame our embattled neighbours for turning to any means possible in order to level the playing  field. Even as the news arrived that three men linked to Tottenham Hotspurs have pleaded guilty to spying on the Hammers during the Olympic bid, it is now rumoured that Spurs have also been looking in on Hammers training sessions in an effort to crack the elusive Hammer’s code.


Recent England U21 training ground footage has served to further terrify the Spurs as Ravel Morrison revealed his ability to defy the laws of physics with an up and under movement that left all observers breathless. Still further valuable intelligence has been gathered at the high-flying U21 Academy training sessions as the lads prepare to further extend their lead at the top of the Premiership table.

And then there’s the thorny issue of undercover Spurs fans infiltrating the Hammers faithful in an attempt to identify what makes them so vociferous during matches. This ploy is especially dangerous given that Spurs fans are the fourth quietest in the Premiership and would obviously stand out a mile in amongst the noisy Hammers contingent.


In other news and still further insult to Barry Hearn’s lowly Leyton Orient, it has emerged that there is ‘no evidence whatsoever’ to suggest that anybody made any attempt to tap into the their ‘top secret’ plans for the Olympic stadium bid. 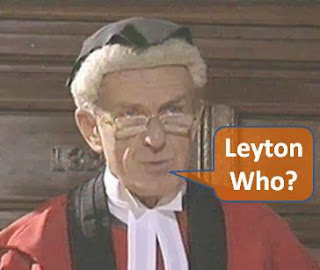