In a season that seems to bring wave after wave of misfortune for the ever-optimistic Bubbles, the latest atrocity to emerge indicates that Winston Reid has sustained an ankle injury and will not be available for Saturday’s trip to Norwich. Moreover, with the dreadful sunburn injuries that our other centre back, James ‘Ginge’ Collins, is rumoured to have sustained whilst on international duty, Hammer’s boss Sam Allardyce has had to look into his squad for centre-back back-up. 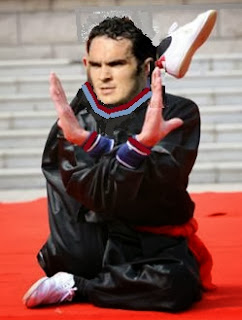 O'Brien can adapt to any formation


Inevitably, up steps the ϋber-flexible Joey ‘the lips’ O’Brien to save the day. The defender who has been a stalwart of the Hammers defence can play anywhere across the back four and has given repeatedly solid performances at right or left back with the occasional assignment at centre-back and will undoubtedly look forward to the opportunity to emphasise his value to the squad and also to the Irish national team.

One of these is Leslie Nielsen


Largely overlooked during Leslie Nielsen’s time as Repuberlick of Oireland manager, ‘Lips’ can expect a much warmer reception from new management pairing of Rodge and Podge –Keane/O’Neill who, unlike the geriatric Italian, are said to like their defenders to be able to pass the ball and also make the occasional foray forward as an overlapping option for the midfield. Trappatoni is said to have ‘reacted badly’ to O’Brien’s penchant for turning defence into attack and froze out the Hammer’s star during his reign.

Hammers favourite, Gary Breen, is said to have expressed his absolute and unequivocal delight that the West Ham centre back line is once again adorned with Irish talent. Breen, who starred for West Ham in the 2002-3 relegation season alongside Christian Daley, is presently first team coach at Peterborough United who are up to third in League One with the second best defensive record in the division.


In respect of the Winston Reid ‘injury’ situation, George Puddlemarsh, a ‘peoples poet and creative agitator’ from Shoreditch, has slammed the recent Hammers press release as ‘deliciously crafty and disingenuous’ as he revealed his latest conspiracy theory that the injury is a ruse to get the persistent squad pocket pickers from Arse 'n all off the scent of the sensationally talented Kiwi. In further unconfirmed rumours, it is thought that the Gooners have responded to his injury by reducing their recent offer of £6million for the Kiwi to a cut-price £5, 999,999. Undoubtedly, this revised offer will be unappealing to the Hammer's board.
Either way, let’s wish wonderful Winston a speedy recovery and hopefully Joey will put in performances that place further pressure on Allardyce when selecting his optimal centre-back pairing.
Posted by Verywestham at 04:31