It’s men and boys as the politics of condemnation kick in at the Boleyn!

In the latest outpourings from the sinking ship that is West Ham United FC, on loan striker - Carlton Cole has lashed out at the cruel nature of West Ham’s blatant publicising of their recent 9-0 thrashing of a Peterborough United XI. Jumping to the defence of what was a young Posh side, Carlton expressed his outrage on twitter (before the standard subsequent removal of said ‘offending’ item). 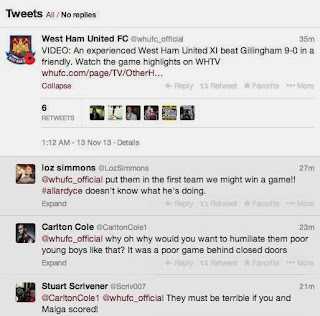 Carlton, who heads a growing band of strikers who disapprove of goals being scored, was clearly upset at his own role in the cruel massacre and unhappy that the usually goal-shy Hammers would make the footage available to the public. The match was marred by numerous goalscoring atrocities including a rare strike from Modi Maiga and the usual brace from Elliot Lee, as well as a goal from a mystery ‘triallist’. Moreover, the farce was heightened when two Peterborough parents insisted that their children be substituted so as to make sure they made it home in time for the 9PM curfew their local school imposes.  One child was said to be so distraught that he vowed to never attend PE classes again!


Unexpectedly, Carlton may have some support from Hammer’s boss Sam Allardyce, who is said to be unhappy at the wanton squandering of precious goals. Sam, who likes nothing better than to sit back and luxuriate in the glow of a 1-0 victory, is said to hate winning by more than a solitary goal and is also worships the clean sheet like no other Premiership manager since George ‘Curmudgeonly’ Graham of Gooner fame!  Sam now ranks almost as highly as Graham on the all time 1-0 victory count for British managers, although he does not feature in the top 1000 all-time Italians managers who have dominated the defence of a single goal lead rankings for decades. 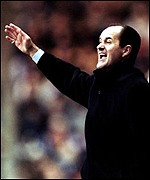 
In other news, Mark Noble is rumoured to have started affecting an Irish brogue ahead of the much predicted approach from The Republic of Ireland for his International services. He is said to have uttered ‘feck’ instead of te much more typically English ‘flip’ after another poor free kick delivery during training and also requested that Bacon and Cabbage be added to the menu at the Chadwell heath training facilities.


Also, in still other news, friends of Sideshow Bob have indicated that he thinks that Alessandro Diamanti should never have left his starring role at West Ham for the bit part he was offered in the Simpsons.