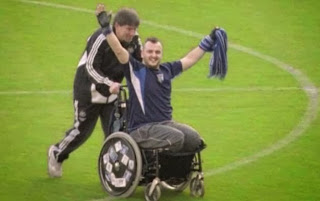 An unrepentant Terry with his faithful minder
Last night witnessed the increasingly ruthless side of the ‘New West Ham’ as a super-strong development squad smashed poor little Gillingham 9-0 in a specially arranged ‘friendly’ tie at Rush Green Stadium. The match was played behind closed doors, largely in an effort to exclude legendary Gillingham Soccer Thug, Terry, who starred in the 2010 epic ‘The Shouting Men’ which followed a motley crew of Gills fans on their journey up through Britain on their way to a cup encounter with Noocassel.
The opening scene includes a memorable encounter between the wheelchair-bound Terry and some hard-looking Hammers supporters who were busy minding their own business until terry intervened with some choice memories of Billy Bonds and Trevor Brooking in their Bubbles heyday. A memorable schmozzle ensued with the unrepentant Terry going on to engage none other than Peter Beardsley as his wheelchair assistant! 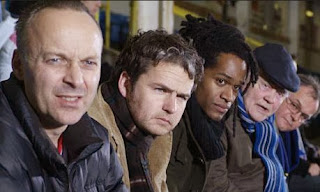 Last night, however, Even the vociferous Terry would have struggled to maintain spirits as a totally outclassed Gillingham were battered by a hungry Hammers side bursting with returning talent (MacCartney, Diarra, Cole, Jarvis ) and the best of the latest academy crop including Elliot Lee and Blair Turgott. 4-0 at half time, and there was to be no let up as even a mysteriously unnamed ‘triallist’ got on the score sheet – Hammers fans are already uop to their necks in speculation as to who it could be? Ba? Benzema?  Benni MacCarthy?


One suspects that it was a pretty quiet Gills bus on the way home. Let’s hope that they didn’t break down. Again!
Posted by Verywestham at 12:53