Canaries 3-1 Hammers: Norwich get out of Porridge with stunning turnaround! 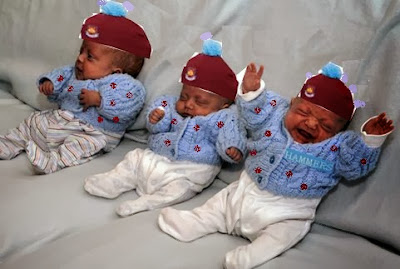 These young Hammers were absolutely furious at referee Eakon's penalty decision
Billericay man Trevor Painton was today the surprised father of triplets at Basildon University Hospital. “I was watching the West ham match on TV when just before half time I got the call that the missus had gone into labour, so I headed off. It was pretty obvious that the game was a done-deal at that stage as the Hammers had totally outclassed Norwich - it was like men and boys out there as Norwich chased around after the ball. If we’d had a striker on it could easily have been 3 or 4 by half time”.


As Trev headed off for the hospital, his last sight of the coverage was a slightly smug-looking Sam Allardyce ushering his heroes in for a well deserved half-time cup of tea. However, suddenly events took an unpredictable turn for the Paintons as Trev’s wife gave birth to one, then a second and then a completely unexpected third baby! Amazingly, the triplets had not shown up on the antenatal scan! “I was a bit surprised alright” said Trevor, “but not as much as with the three that the Hammers shipped – they just kept coming, one after the other!!!” 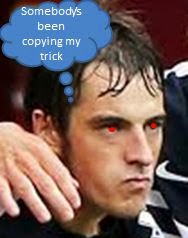 Trevor found time this morning to watch the recorded version of the second half and was outraged by Norwich’s ridiculous penalty that allowed Gary Hooper to pull the sides level. “Suddenly, I got this eerie sensation – Norwich were still looking hopeless, but then they ruddy went and did a Satan Baines on us” he sneered, “The third was just the final insult”. 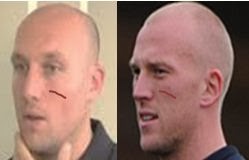 Note how the action-man scar is less obvious on the 'new' Ashton
However, Norwich’s post ‘victory’ euphoria was somewhat dulled as sources close to the FA revealed that they intend to investigate the apparent use of a ‘ringer’ by the crafty East Anglians. Former Canary- Hammer Dean Ashton, who had to retire from footie soon after signing a five year deal that would have run until the end of 2013, appears to have reappeared in the disguise of Norwich keeper John Ruddy! “It’s remarkable really”, said Trevor, “and it makes you wonder how many top stars have faked their own retirement so that they can come back as another high-wage earning player – what chance is there for young talent to come through if established stars behave like this?”


In related developments, the Actors guild are said to be examining the Snodgrass double-jobbing situation. 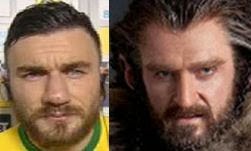