Toffees Game Wrapped up in Mystery 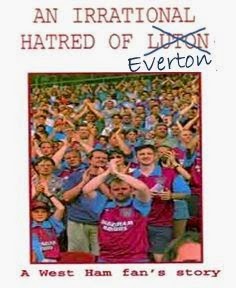 Arghhhh! Just when things were going all doom and gloom, with one point in the last three games, all sorts of departures for the AfCoN, Winston Reid playing coy, and rumours that Andy may be crocked again, along comes the romance of the Cup and........ Everton - a club who are vying with Arsenal to be our biggest bogey team.

It's hard to believe that it is now 14 games on the trot since we got a decent result against either side. Just think, in a league comprised of the Gooners, Toffees and us we could go a whole season without a win!

On this occasion, Everton have lost four games in a row and have not beaten us in the FA Cup in our past five encounters - a record that stretches back to the 1950s!

But we are without Song, Sakho, Kouyate, possibly Carroll and have no Zarate to spring a surprise. Moreover, "crafty" Sam will likely use the match to shopwindow Vaz Te, Jarvis and the like. Zzzzzzzz. It doesn't look good. Moreover,  we seem to have awful fortune up there - so much so that many fans must be considering a rewrite of Robert Banks classic.

And then there's the Lukaku factor- he is struggling to find goals of late since his permanent move but has he ever not scored against us? Ditto Satan Baines - if he's not scoring audacious free kicks then it's up there providing assists. Grrrrr!

Still, Goodison games are generally exciting as we have little to lose. Maybe, at long last, it's payback time for Paolo's moment of good sportsmanship all those years ago? If we get ahead and any of the current crop dare squander such an opportunity they would surely be shot!

For the first time ever we at VERYWESTHAM are predicting a Hammers defeat. 3-1, and with some irritating controversy to add to the misery!

Btw: readers are advised that DM is currently laid up with man flu and may be more irrational than usual