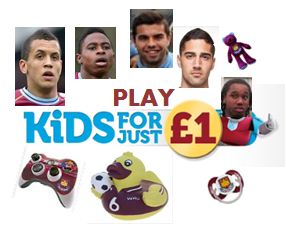 The West Ham ‘Kids for a Quid’ scheme started to finally pay off for Messers Sullivan and Gold this evening as, in an effort to save up enough cash to buy a back-up striker, they have turned their child-friendly supporters scheme on it’s head and insisted that their young stars on ly receive a quid for turning out tonight! For some Hammers stars parents, this has proven a step too far and it is rumoured that Dan Pott’s mum has forbidden Big Sam from allowing him to play after his usual bedtime of 9.30PM.

The late kick off will also likely prove a major impediment to rising starlet Ravel Morrison who, after  wearing gloves during his 15 minute cameo at St James’ Park on Saturday afternoon, will need a full body warmer suit in order to survive the harsh late evening chill that sometimes descends upon the East End at this time of year.


Otherwise, the evening can provide valuable opportunities for fringe squaddies to prove their worth with a rare start up front for Ricky Vaz Te, the return of Georgie McCartney to the defence, a belated run out for Ratzvan Rat at left back and a first Captainship of the first team for Basildon hero James Tomkins. Seb Lletget and Elliot Lee will also be hoping to get some match time, while Leo Chambers is set to start!
COYI!
Posted by Verywestham at 13:10