We are top of the league! West Ham 2-0 Cardiff

The perfect start for the Bubbles boys in a match that was all hussle and bustle and lots of West ham pressure that is soooo much more lively than anything we’ve witnessed preseason! Premiership newbies Cardiff City found the going pretty tough and ultimately couldn’t even get a shot on target over the ninety minutes. They also looked pretty nervous from set pieces as the muscular Hammers imposed themselves throughout.


After a number of half chances the breakthrough came after 13 minutes when Jarvis combined with Joe Cole who slapped one into the net on the turn. Jarvis will be delighted to have already surpassed his assist count from last season. The first half stormed along with crosses raining in on to the Bluebirds penalty area but that vital second remained elusive. 1-0 at half time but really a two goal lead would have been a fairer representation of proceedings.


Early in the second half and Cardiff started to look less dominated but without creating clear chances. Then on comes Downing for Jarvis and the game ignites again. Downing will be well pleased with his performance demonstrating how he can be tricky and penetrating and importantly, two-footed as Cardiff couldn’t work out whether to shepherd him inside or outside as he darted around the right flank. Then on 65 minutes Mark Noble makes a rare foray forward into the Cardiff box, slips it to Captain Kev and it’s 2-0. 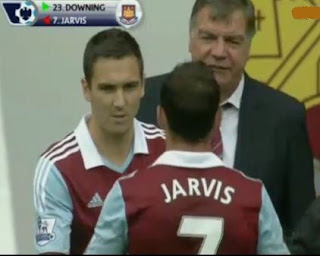 Cardiff tried to respond by bringing on ex-Hammer Nicky Maynard for ex-Hammer Craig Bellamy (both of whom received generously warm receptions). They managed to create two late chances for Maynard (to miss spectacularly from 5 yards out) and a Whittingham free-kick (that slipped wide) but it amounts to nought and it’s a clean sheet as well as a tidy victory for Sam’s boys.


There’s even time for Alou Diarra to come and at the end it was all smiles, especially for Billy Bonds who’s contribution (783 games) to the West Ham cause was honoured in a prematch ceremony. Special mention for Cole, Diame and Downing who all looked a class above anything Cardiff had to offer. 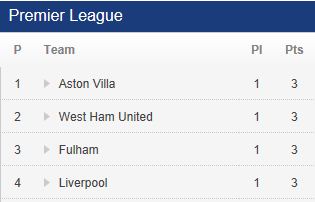 So it’s joint top of the league, with Aston Villa’s late goal against Arsenal pushing them ahead on goals scored. It's early days, and Cardiff may well prove to be short of Premiership standard but you can only beat what's put in front of you.
Next it’s off to Newcastle for next week’s match….if we set off now on foot we should make it just in time.
Posted by Verywestham at 09:28