With the new season upon us, the warning flares are already being released around Upton Park as the brave Hammers find themselves already stranded at the bottom of the league. With perhaps the strongest squad since the disastrous 2003 season, when the Hammers were relegated despite having Di Canio / Cole / Lampard / James / Carrick / Defoe / etc etc, Big Sam needs to take urgent action as the Bubbles boys welcome high-flying Cardiff who currently occupy third place and a Champions League berth!
Premiership table: August 17th 2013

Hammers fans will be somewhat cheered by the presence of Mark Noble, James Collins and Georgie McCartney who were all in the team that achieved Premiership safety in 2007 when Carlos Tevez scored the winning goal at Old Trafford to secure a sensational 1-0 victory for the Hammers. No doubt Big Sam will be summoning his troops to remember that with 10 games to play that West Ham were hopelessly detached from the rest BUT STILL MANAGED A GREAT ESCAPE. 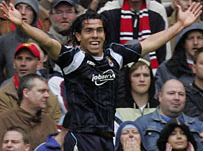 NEVER give up!
Some mathematically over-focused Hammers fans will be praying for a definitive result in the early kick off match between Liverpool and Stoke as this would lift the Hammers off the bottom prior to their match but for the rest of us laid back types as the new season kicks into gear - anything is still possible!
COYI!!!
Posted by Verywestham at 05:00