A trip to Portugal and a chance to remember shared heroes in Paulo Futre and Dani who are fondly remebered by supporters of both these teams for their contributions. Moreover, Racky Vaz Te was a youth at Sporting, so much to celeberate together. 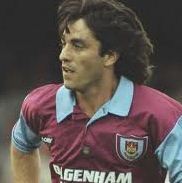 The Guadiana tournament includes three teams – west Ham, Sporting Lisbon and FC Braga. West Ham have the tough assignment of playing two games in 26 hours as they face FC Braga tomorrow evening after tonights match vs Sporting. Also, tonight’s game will involve a penalty shoot out  - just in case – it’s needed to separate the teams after all three games are done! Valuable practice for the Hammers and a bit of fun to boot! 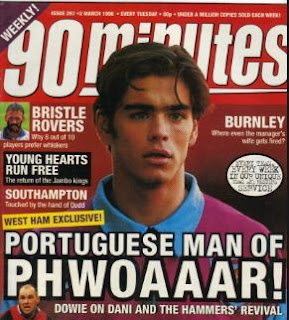 So, it was all set up for a pleasant Iberian Summer evening’s stroll until the match whistle signalled the commencement of hostilities and the niggly-nonsense began! The Hammers got some valuable competitive match experience ahead of the new season with the Portuguese determined to gain an advantage however necessary. Happily, Sam’s lads find the early physical contest to their liking and  most of the decent play of the first half hour is from the Bubbles boys. A few close misses but generally scrappy enough - Then suddenly, with the 25th free kick of the first half, Sporting are awarded a ridiculous penalty for an alleged hand ball (not so on second viewing!) and take the lead from the spot in the fourth minute of 2 minutes of added time!!! The Hammers go inat half time quite justifiably aggrieved… 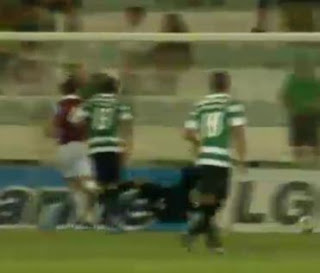 And then the second half – the Hammers start with intent and impose a fast tempo that is simply too much for te Portuguese. Then two goals in two minutes as Maiga knocks on athrow in for poacher Nolan to tap in and a few seconds later Ravel Morrison rattles the back of the net with a scorcher from 25 yards….happy days!!! With 30 minutes still to go this poses a decent test for the Hammers and Big Sam throws young Pelly Ruddock, Elliot Lee and Seb Lletget into the fold for some valuable experience. 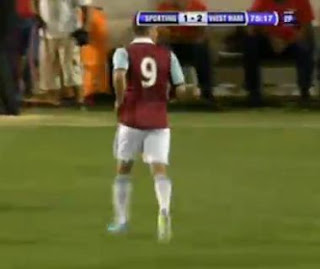 Uncharacteristically risky from the normally conservative Allardyce! The young guns don’t let him down and keep Lisbon chasing until Ravel Morrison steals a second from a Joe Cole cross and it’s suddenly 3-1 with ten minutes to go. 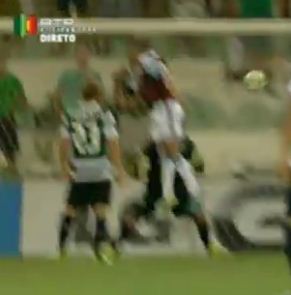 Sporting throw everything at it and their enthusiasm seems to affect the match referee who awards another dubious free after Joe Cole is ? fouled but from the resulting free kick chaos ensues and the ball bounces in to the Hammers net…what on earth happened there??? Although the free kick seemed ridiculous you’ve got to criticise the defending, hmmmmm……


Despite this setback the Hammers hold out quite comfortably to win 3-2. A great team performance with Ravel Morrison and Joe Cole putting in noteworthy performances…Big Sam is well pleased and rightly so. 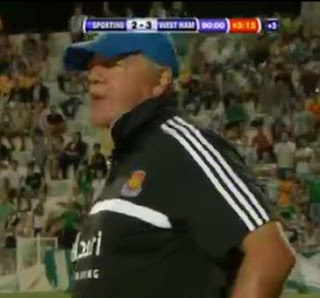 And then the weird experience of a penalty shoot out even though the match has been won by West Ham!


First up….Carvalho with cruel efficiency puts Sporting ahead – over to Mark Noble: 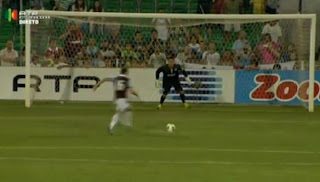 
Second its Eduardo for the Portuguese…..cool and composed and its 2-1. Over to the hero of the night for the Hammers, Ravel Morrison… 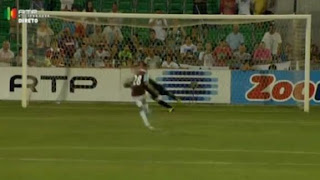 Oops.....Unlucky, the keeper saves it with his feet! It’s still 2-1
Next up Chaby dispatches a third with ease.. now it’s 3-1 to Lisbon. Young Eliot Lee steps up under some considerable pressure… 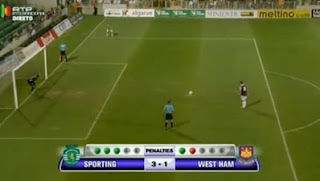 
And now the Lisbon train keeps rolling on as Mauricio slots their fourth…Jussi hasn’t had a glimpse of a chance so far. Pressure now for Matt Jarvis as he needs to score to keep the Hammers alive….. 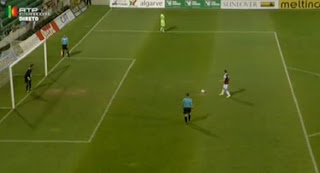 Cool and the gang …..it’s 4-3 and now Jussi needs to save the final Lisbon penalty


Up steps Rojo…….and cracks it about 5 yards over the bar!!! It’s up to Joe Cole to level matters 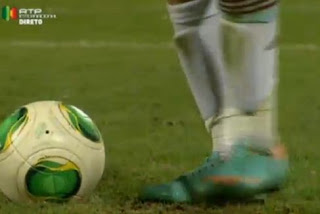 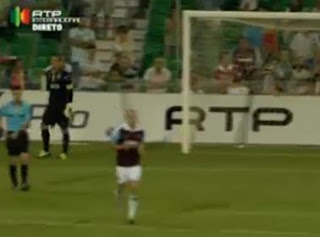 Nice penalty, it’s 4-4 and this surreal penalty shoot out ends without a winner!!!

Well actually that's not true...West ham were the clear winners in every respect on the night, including the 3-2 match score!