Whahey! And off we go. Hussle and bustle and lots of West ham pressure in a fast flowing match that is soooo much more lively than anything we’ve witnessed preseason! Premiership newbies Cardiff City are showing some nervousness from set pieces as the muscular Hammers push forward and a few early half chances ensue. Cardiff showcasing their new Chilean midfield signing Gary ‘the pitbull’ Medel (apparently named after Gary Lineker!?!) but he’s struggled so far to make an impact upon the dominance of West Ham’s midfield and especially Momo Diame who looks right on song again. 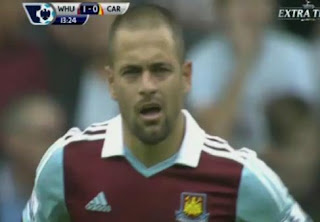 Then along comes unlucky 13 for Cardiff and Matt Jarvis slips the ball to Joe Cole who continues his excellent preseason form with a delightful shot on the turn. 1-0 to the Bubbles boys. Soon after another golden chance as Cole is slipped through by Noble but tries an audacious chip that falls short reminding us that he’s no replacement striker for Carroll!


As the half progresses it’s all Hammers now…..the crosses start to reign in then Diame is terribly unlucky with a surging run and shot that is just wide then Collins gets a free header from a corner that slides wide. Still 1-0 and the Hammers need to press this advantage for a crucial second. Cardiff meanwhile look best on the break – maybe they should give us a few more corners?


Cardiff get a glimpse with a free kick from all of 35 yards out just before half time but the Hammers stay cool. Real cool baby!
it's half time. All Hammers. this game is ours to lose. Hmmmm.
Posted by Verywestham at 07:51