Recent media reports have highlighted Andy Carroll’s generous side whereby he has been pictured apparently donating a £50 note to a street hustler in London’s Soho area. In fact, our intrepid staff detective has revealed that the picture in all likelihood actually shows Andy being propositioned by a short-sighted nocturnal reveller who looks quite the worse for wear and who seems to have mistaken Andy’s Samson-like locks for those of a temptress of the night

The more than averagely manly Carroll looks far from amused by the poor gentleman’s error – moreover, the ace ‘ninety grand-a-week’ striker is thought to have been deeply insulted at the offer of a mere fifty lids for his attentions. However, some observers have suggested that Carroll should ‘get with the times’ - Frances Francis of the Female impersonators guild seized the opportunity to highlight how her members have had to reduce their appearance fees at stag-do-s etc by almost 25% during these harsh recessionary times.

Andy, in his Newcastle days, possibly


These embarrassing scenes are nothing new for those men who temp fate (and myopic disability) in their penchant for flamboyant hairstyles – Rene Higuita, the infamous Colombian Net minder, found himself the subject of endless public harassment by gold-digging Romeos who regularly mistook him for the ultra-loaded US chatshow host Oprah Winfrey.

Luckily, the talented performer had a trademark manoevre to prove his true identity that the real Oprah's was unable to perform. 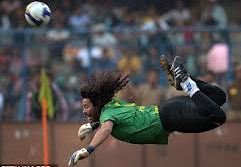 While Andy may well disapprove of being mistaken for the fairer sex, other Geordie heroes have been less averse to such cross-gender experiences, with the evergreen Gazza once successfully modelling for a myopic man’s razzle mag as Bertha the Bootiful! 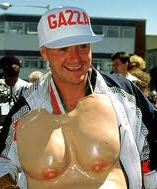 Either way, this latest incident bodes badly for Premiership defences ahead of the coming season when the physically robust striker will have a point to prove and it will undoubtedly take more than a mere fifty quid to tame the hirsute Hammer’s hero. 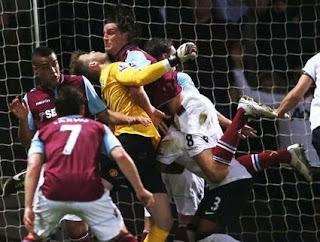 Oops, pardon me Sir!
Posted by Verywestham at 14:51