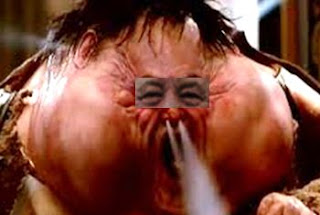 In tragic news today it was revealed that a suspected terrorist attack in the East London area was, in fact, the head of ex-Leyton Orient Chairman Barry Hearn finally succumbing to the extreme vitriolic rage within. Apparently, upon learning that some folk at West Ham were happy and content with the proposed move to their new home at the OS, Mr Hearn's head became even more swollen than usual before suddenly exploding messily all over East London! Fittingly. He may have finally gotten a slice of the action at the Olympic stadium as a small part of his cerebellum is thought to have landed beside the half way line.
﻿﻿﻿﻿
The state pathologist has put the death down to natural causes – “Mr Hearn was always expected to eventually spontaneously combust due to the relentless whinging and whining that he engaged in and the prospect of having to endure West Ham's triumphant return to European action seems to have finally pushed him too far". An insider a local public house revealed 'most observers feel that this awful incident needs to finally put an end to the relentless and totally pointless windbagging from Hearn and his motley gang of whining whingers'.
However, Top Mystic Charlotte-Anne has warned the Hammers staff to look out for poltergeist activities as Hearn is unlikely to let mere death stand in the way of further futile protesting.
Posted by Verywestham at 02:09