Morrison Return Definitely on the Cards

Any review of last season will surely include amongst the disappointments section the failure of Ravel Morrison to realise his potential at West Ham. Instead, Hammers fans were treated to a series of foolish and seemingly illogical antics as he was twice shifted out on loan before finally being shown the door. He duly signed an agreement with Lazio - a club not unfamiliar with behaviourally challenging Brits having guested Gazza and his minder Jimmy Fivebellies Gardner back in the day.

However, it appears that the wheels have already come off for Ravel with reports that he wants to leave due to 'homesickness'. That, interspersed with outlandish notions that he might one day manage West Ham in the Champions League, raise concerns that his old demons back. In all of this, David Gold has maintained a distinctly paternalistic stance on all things Ravel and last week tweeted words of encouragement to the troubled star.

This has, in turn, provoked rumours that Morrison is set to return to the Boleyn. Intrigued by the possibility, we contacted everybody's favourite bookmaker - Paddy Poormaker - to seek odds on a Morrison return. After a delay caused by much guffawing they offered us the following odds; 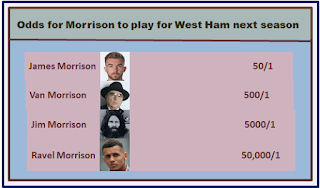 We think legendary Doors frontman Jim Douglas Morrison is a decent bet, especially given new evidence to support the fact that he faked his own death to escape the twenty-plus paternity suits he was facing at the time of his disappearance. He has apparently been spotted playing for a second tier team in Senegal and could join the increasing band of African imports to the Premiership.

With his undoubted creativity, along with tremendous scoring ability, Jim could be a perfect back up for Stewart Downing at the head of the midfield triangle that served West Ham so well at the beginning of last season before Sam abandoned it to accomodate Andy Injury.

One issue that might block a potential move is the inevitability that 'tragic' Sheeffield United would demnad compensation for the dodgy paper work around Morrison's death, which has also definitely contributed to their horrible demise over recent years.

Even better, check out Ricardo Vaz Te's version of the same tune. Before steering West Ham back to the Premiership, Ricky spent a bit of time playing with a little known band who covered old 60s classics before he too was forced to fake his own death and reinvent himself as a footballer.

Whatever the odds offered, Ravel is unlikely to receive the Morrison "love me two times" treatment from the Hammers!