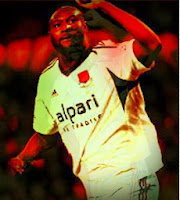 The VERYWESTHAM team decided to give the Old Trafford game a miss yesterday as their two previous trips brought an aggregate 11-2 beating having involved the 7-1 April Fool’s day thrashing in 2000 and the 4-1 tonking in May 2008. We had not even managed a goal in the interim – which does little for the belief that staying away makes much of a difference either way! That said, the Hammers under Big Sam have given man United a run for their money on every occasion that we have met and very nearly beat them twiceat the Boleyn last season. A somewhat optimistic bubbles brigade tuned in.


However, it was to prove another frustrating day for the Bubbles men yesterday as the annual trip to Manchester United delivered the annual zero points. It was almost as boring as receiving the Eurovision Song Contest points from the French jury where Royaume-Uni inevitably get nil points. It was pretty much the usual story with a brave first 25 minutes during which Adrian was excellent and full justified his selection in goals ahead of the autumnal Jussi Jaaskelainen.


Then Man United got a free kick – for no apparent reason – and were allowed to take it quickly and as the Hammers back peddled it was too little too late and Welbeck smacked the ball under Adrian and it was 1-0. Hmmm.


In truth, we were lucky not to concede a penalty before that when Mark Noble had the audacity to touch against Januzaj who duly did the back flip and double somersault routine that so often brings a penalty for the home team at Old Trafford. Maybe things are changing now that Mr Nasty has left the manager’s dugout (although he continues to loiter around the building adding to the pressure on David Moyes) and the youngster was booked! Errrr.


We stuttered without real intent and then they suckered a well-executed second with Januzaj slotting one in from almost the same position having worked his way in via a one-two with Welbeck. Suddenly we were out of touch and they started playing circus tricks. We came out looking energetic for the second half and after a few minutes Big Sam decided to throw caution to the wind and play two up front. However, almost immediately, and within seconds of his arrival as a substitute, Ashley Young scored a stunning goal from the edge of the area being teed up by Wayne Rooney. Game over. 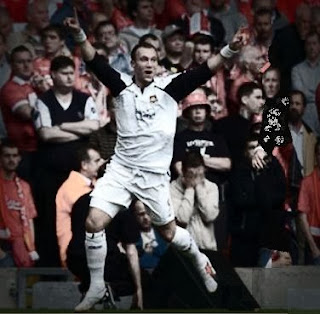 We didn’t drop heads and were duly rewarded when carlton Cole beat a lazy offside trap and was ice-cool in pushing the ball between De Gea’s legs. Our first strike at Old Trafford since Dean Ashton’s delightful overhead kick in 2008. Plus Ca Change, plus c’est la meme chose! At least we got a goal for once =- maybe it's a case of small steps and we might nick a point next year?

Oh. And isn’t our away kit totally drab – bring back the iconic skyblue with double claret lineage as soon as possible!
Posted by Verywestham at 08:46