Sasquatch sighting at Upton Park: But where is Andy Carroll?

Amidst all the horror of yesterday’s insipid performance against lowly Sunderland, there was yet more terror for the Bubbles faithful to endure as the stadium was held to siege by the latest sighting of the ‘hairy man’ or Sasquatch as he is known to our North American friends.


Eyewitness accounts said that the creature made a brazen appearance, showing no fear even when approached by West Ham’s self-appointed ‘enforcer’, Kevin Nolan. Instead, the beast merely laughed off Nolan’s advances before tucking into a few of the tasty pies on offer at the stadium. 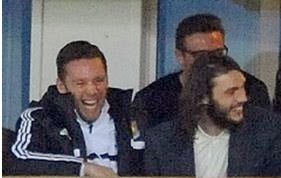 ‘Sas’ with Kev - before the meat pies kicked in
Scientists have suggested that these pies may have satisfied his legendary appetite for raw and uncooked meat and thus possibly saved dozens of human lives. He was later seen hobbling off back into the bush towards the rear of the Boleyn Pub, howling in pain and holding his stomach.


Observers have hailed the sighting as a major breakthrough for conspiracy theorists and other nutters who will undoubtedly take the opportunity to remind an easily terrified public about the variety of unsolved mysteries ranging from the Loch Ness Monster to the disappearance of ‘Lucky’ Lord Lucan.
However, with the century-spanning mystery regarding the existence of Bigfoot now solved, Hammers fans attentions will return to the pressing question of where their marque Summer striker signing – ‘Sorefoot’ has disappeared to as there have been no sightings of the highly paid superstar in action for months on end. 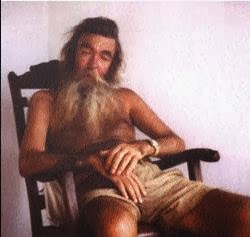 Jungly Barry – neither  ‘Lucky’ nor ‘Sorefoot’
Top scientists have scoffed at suggestions that the striker’s return may be imminent as there have been no verifiable sightings apart from reports by over-excitable and tiresomely optimistic Hammers fans – all of whom were so easily duped by the original fables of his early-Summer capture.


Meanwhile, longstanding tormented Hammers fan Phil Gassybottom, landlord at the White Lion pub in Fobbing, Essex offered an intriguing insight into the nature of the Sasquatch / Andy Carroll link –  “Has anyone considered that maybe they are one and the same person – I ask you; have you ever seen them together”? 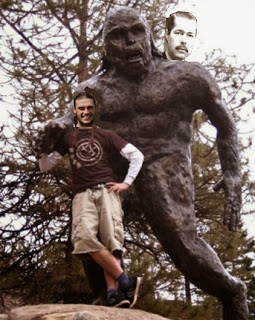