Saturdays much needed victory over Fulham served to raise as many issues as solutions for the usually conservative West Ham manager. We look at some of the issues arising from Saturday’s encounter;
1.  It’s fair to say that Big Sam gave the strikerless formation a decent run after the Spurs success but finally had to accept that it wasn’t working and that better sides had rumbled that as long as you defend set pieces carefully, a side set up with no striker is most unlikely to score and that it’s just a case of threading percentage balls through until one connects or the opposition gifts you a goal with a defensive error. The presence of a striker gives the midfielders some hope of getting forward in time to gain possession rather than trying to suck the opposition in too deep and catch them on the counter.


2. Modi Maiga can provide a physical presence up front, including a decent share of aerial challenges. He clearly hasn’t given up – even though most fans have abandoned ship at this stage. Carlton Cole is as good (or average) as ever and will always put in a shift. ‘Killer’ Cole seems a little less unlucky in front of goal than Maiga. It’s a toss up between the pair as to who should start tomorrow night. The nonsense regarding Carlton Cole’s fitness lacks credibility as he has been back with us for nearly two months now and you’d have to wonder how out of shape a 29 year old can become in a few weeks!


3. Stewart Downing is our best wide player and will surely provide an even bigger contribution when Andy Carroll returns. He also has an ever growing relationship with Guy Demel and tracks back to useful purpose when needed. Matt Jarvis looks over anxious to perform while Joe Cole remains pure class. Palace will defend deep and with determination such that the trickery of Cole may provide a better option for unlocking their defence. Cole is also more likely to score himself while Matt Jarvis features only rarely on the scorers sheet. It's a close call, but this is more likely to be about guile than pace, and Joe Cole gets the nod.


4. In central midfield, Noble is a non-negotiable. Nolan still looks off form. Morrison is surely deserving of a starting berth but at who’s expense? Many fans underestimate the worth of Nolan on the field in his Captain's role to nag the referee, niggle the opposition and calm his own troops when it gets unhelpfully heated. With Diame back on form, it looks like young Morrison will have to settle for the subs bench but with an understanding that he will be sprung at some point. Nolan needs a goal as the clock is ticking and Morrison is an obvious replacement.


5. We should score more often from set pieces. It’s frequently mayhem when we float in free kicks and corners yet we have had minimal actual success in the shape og goals scored so far this season. This will surely change and maybe the addition of Carroll will bring that little bit extra to convert chances to actual set piece goals.


A win is vital as we have a series of tough fixtures to follow. For Palace, already every game is a cup final and Pulis will have them well up for it. An early goal for the Hammers would set up a repeat of last saturday while Palace will grow in confidence if they can stay in touch for the first twenty minutes. On balance, we recommend the following starting XI. 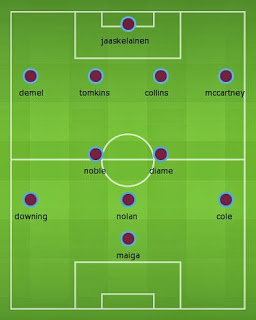