Just as West Ham release their delicious new third ‘change’ kit with it’s unusual purply-purpleness that provokes images of late nights full of psychedelic mayhem, Rav the Chav Morrison has managed to steal the limelight by bringing embarrassment upon the club and posting a pic of himself wearing an Arsenal jersey whilst posing in his Ferrari (yes – that we as West ham fans have paid for!). This comes on the back of a recent similarly provocative pic of him wearing a Chelsea jersey and is his way of communicating his contriteness for dragging the club through the court system  as he faces allegations of astoundingly dreadful behaviour involving threats of using acid and / or death in a dispute with his ex-girlfriend!!!


How different is this from the behaviour that brought so much negativity to Paul Ince? ‘Incegate’ as it is known,occurred as a young and somewhat brash Hammers star was photographed wearing Man United colours whilst still a West ham employee and for which he faced the sustained and considerable ire of many West Ham fans. Ince had been a footballing sensation in the season before that and no doubt some of the irritation at his moment of foolishness was driven by the disappointment of losing our star player.


The whole affair is surely part of the educational programme that all modern footie stars are exposed to in order to prepare them for the reality that footie fans expect full commitment from their players and that wearing the colours of the enemy is perceived as amongst the most serious forms of treachery possible.


But then again, some of our current ‘stars’ are so detached from reality that they seem totally resistant to such simple educational interventions.  Morrison has still achieved nothing in football (and certainly hasn't had a season to match the one young Ince had at West Ham) yet he can afford to hang out in a Ferrari, presumably making some juvenile point to somebody out there.


If this is where the money goes, to pay for flash cars and barristers for underperforming spoilt brats, then maybe we really are paying too much at the turnstiles? Just as moving on Suarez is necessary for a club with the traditions of Liverpool, at West Ham we don't need players who cannot behavein a reasonably dignified manner and if the current charges are upheld we really need to ask ourselves if a few circus tricks are enough to justify holding on to somebody of such dubious  character. 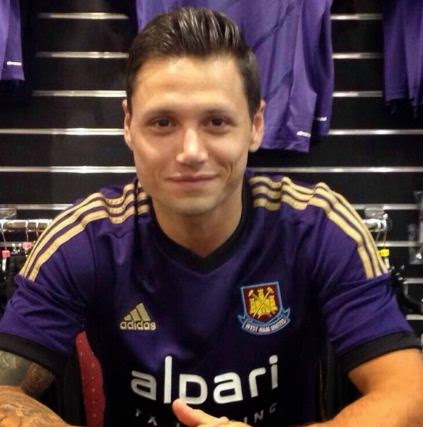 By the way - this is the new third kit. Visibly developing on the dark blue one of previous years but perhaps a bit more funky? It seems unlikely Morrison will ever get to wear it.
Posted by Verywestham at 00:30