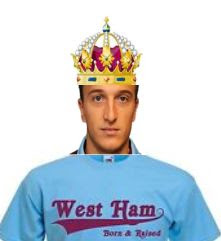 In appauling scenes this evening, West ham fans were forced to endure an interview with Wicked Woy Hodgson on MOTD. Cornered by Alan Shearer, Woy was asked whether Mark Noble's consistently fantastic performances for West Ham might be relevant to an Engerland call up.

Poor Alan received the classic 'change the subject' response with a loada drivel about how happy Woy is with his existing midfield (???) and an obfuscating interlude about Danny Drinkwater(???)...ZZZZ!

Mark, we love you BUT you will never get an England call up under 'tactical genius' Woy. He has no intention of bringing you in and realistically It's time you cut your losses and declared for Oireland....you know it's true and we would welcome you with open minds, arms and hearts.....not like Woy and his saddo cronies!!!!
Posted by Verywestham at 16:12