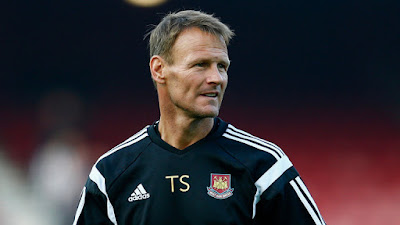 While much of the Allardyce era was characterised by rather dour football that emphasised statistically 'effective' tactics, there was a brief period during the first half of last season when the Hammers took the Premiership by storm with open exciting football.

This new era was attributed to the contributions of ex-Hammers player Teddy Sheringham, who had arrived as forwards coach and rapidly instilled a degree of movement and flair that was reminiscent of the much lauded 'West Ham way' of old.

Teddy departed last Summer to take up the managers seat at Stevenage. With his deep knowledge of the game, most expected this move to be a success but after just seven months service, and with Stevenage positioned in 19th in League 2, Teddy has been shown the door.

All of which will provide an opportunity for West ham to ponder on the merits of bringing Sheringham back to Upton Park. With the range of forwards at our disposal at present, Teddy would surely relish the opportunity?
Posted by Verywestham at 10:36