It was only ever gonna end with some claret getting spilled, but fortunately for the Hammers, Big Sam was left savouring a glass of the finest wine whilst Sean Dyche was left cold as the Premiership big boys gave Burnley a feel for the challenge ahead if they can stay top of the Championship and achieve Premiership status next year.


With a young side eager for big match experience, West Ham took the field wondering if they could halt Burnley’s remarkable home progress so far this season. After a pretty tame first 45 minutes, where possession was 50-50 but without any clear cut scoring chances,  it all kicked off in the second period as the Hammers went in search of the crucial breakthrough. On came Jack Collison, home from his holidays in Bournemouth and raring to go. In some nice interchanges that followed, Burnley started to look less secure at the back and the Hammers looked strangely exciting in a 4-4-2 with Maiga and Cole linking up well. With the gathering sense that a breakthrough was nigh, Joe Cole had a delightful goal from an overhead kick disallowed for offside. Grrr!


On came Downing and Nolan for Tomkins and Cole and soonafter Nolan was hauled down in the box. As Hammers fans braced themselves for the inevitable Noble conversion, it suddenly dawned that Nobes was back at home enjoying a night off! Up stepped Matt Taylor – accurate as always and dispensed the kick. 1-0.

Burnley huffed a bit but as injury time arrived they pushed on too hard and were caught by the breaking Hammers. Collison was on the point of walking the ball into the net when he was clattered by Keith Treacy and a second penalty was awarded. Tough on Treacy who had been Burnley’s best player on the night. Collison took on the responsibility and slotted for 2-0. 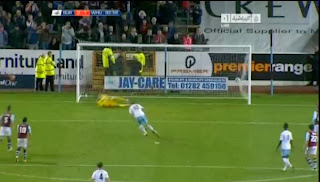 A great debut for Pelly Ruddock and excellent performances from Leo Chambers and Dan Potts as well.

And so it’s on to the last eight. Hmmmm.
Posted by Verywestham at 15:20