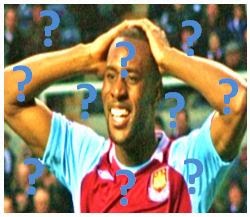 Are VeryWestHam alone in our gathering sense of discomfort about the whole Carlton Cole affair since he parted ways with the club last Summer? While the decision to seek a new challenge was totally understandable in the context of his age and obvious second choice status to Andy Carroll in a lone-striker system, what has followed has become increasingly mystifying. After a Summer being linked with all sorts of exotic new employers ranging from Japan to the USA to Turkey and even ‘tragic’ QPR, in the short space of a few months he has dropped from being the tee shirt icon of “Sex and drugs and Carlton Cole” status, to being better described as “sex and drugs and on the dole”!
The latest nonsense that played out as a ‘behind the scenes’ friendly with Charlton seemed bizarre to say the least as he seems to be expected to prove his fitness and value to the cause. What can we really learn about Carlton in a soul-less encounter with a modest Championship side that we don’t already know? After 5 years Carlton’s footballing abilities pose little mystery and any half attentive Hammers fan knows both the capabilities and limitations of the big man. For sure, he is a physical presence on the field who weighs in with a modest goal haul that includes some memorable crackers, but he simply doesn’t score enough of the tap ins that a truly predatorial striker thrives upon to serve as the lead striker in a strike force of one. Moreover, Carlton is a big game player – remember the Championship play off final or the thumping of Chelsea last year? Charlton with a stray dog and two empty crisp bags as an audience is hardly what gets the big man up for it!


However, perhaps the more difficult aspect to get to grips with is the fact that any observer of Cole’s progress over the years will have recognised that he suffers more than most from the ‘confidence’ syndrome – when he is buzzing he can be virtually unmarkable, while when his confidence ebbs, he can look disinterested  and even lost out on the pitch. This Jekyll and Hyde aspect of his character has served to frustrate the Hammers faithful while also bringing him into our affections. Carlton responds to encouragement and reinforcement rather than the challenge of proving himself or doubters wrong. At present we seem to be sending mixed messages as to whether we really want him and whether we think he’s actually good enough. Hardly the positivity he tends to thrive upon.
And this is what makes the current pantomime all the more bemusing – even if he does ultimately sign for us we are likely to get the ‘low in confidence’ Carlton rather than the buzzing for action ‘Killer’ Cole that Andy Carroll’s absence requires. Perhaps even more significantly,  Carlton is a proper Hammer more because of his likeability and commitment than raw ability or scoring prowess. This guy is an all round decent bloke who took a pay cut for the cause when we were haemorrhaging both financially and spiritually after the Avram Grant relegation. I’m sure all true Hammers fans had that special feeling that we are more than just a financial entity when Carlton revealed “You can't be on Premier League wages in the Championship. I know money is a massive factor in everyone's career, but when you don't deserve it, as you have been relegated, you need to work back to where you need to get to”. Not every club can boast that it provokes that kind of loyalty amongst the increasingly mercenary players of the modern era, but we do pride ourselves upon being ‘Moore than just a football club’ and somewhere deep inside I think that we all actually do believe that to be true.


In this very week when Harry Rednapp’s autobiography has highlighted the importance of looking after our own – both absolute legends like Bobby Moore and Billy Bonds as well as loyal servants such as Carlton – we should be doing better by the lad.
Much much better.
Posted by Verywestham at 08:54