It’s been a crazy week at Upton Park preparing for the visit of the Premiership’s current champions and superloaded gazzillionaire rich kids from Manchester City. The club are said to have installed a special tantrum suite for the away side in case any of their volatile stars hit top tantrumming form today. 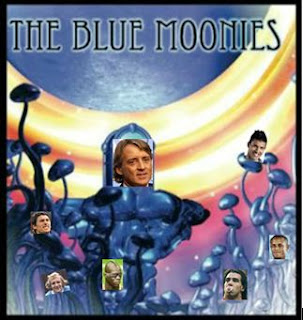 However, in worrying developments for the Hammers, the recent injury to Micah Richards has raised the unimaginable terror of the young Hammers side being exposed to a full ninety minutes of the frighteningly scary Joleon Lescott. 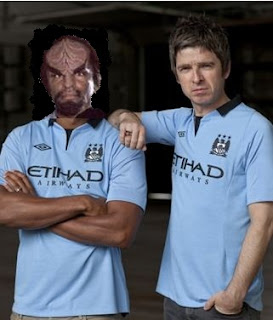 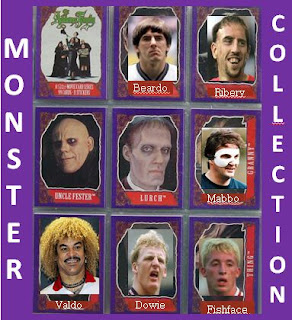 Some of the soccer horror card collection

In an exclusive interview, Lescott’s fellow Klingonian Gervinho - with whom he was a club mate at FC Kabashtackkakkaa during their triumphant Intergalactic Premier league championship run of 2009, revealed;
“DaHjaj veng DIchDaq 'ej pemHov 'et Ham DIchDaq Hegh”
(Today City will win and West Ham will be destroyed)

Gervinho, Lescott and Carlos Valderrama during their Klingon league days
In other developments, the FA have launched an enquiry into whether Joe Hart’s ridiculous hairstyle is technically legal as some observers have commented that the peacock design may pose an unnecessary distraction for opposition players. Taking time out from strutting around the Man City training ground this week, the arrogant young goalstopper revealed his plans to retire from football to work with media mogul Louis Walsh and, somewhat ironically, today’s opponent, the dishy James Tomkins, to create a new Boy Band called “Vak-You-Us”. Predictably, in the build up to the big game, Carlos ‘Apache Pizza’ Tevez has revealed that he may play against his former employers, but also warned that he may not, depending on whether the Carlos Respect-o-meter® readings on Thursday and Friday are adequate. Conversely, Mario Balotelli has indicated that he is willing to play but only if selected at left back. 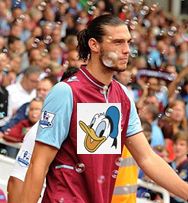 Meanwhile City boss, former QPR and Arsenal leg End Terry Mancini, took time out from composing his theme for the new pink panther movie to identify the key clash to watch out for in today’s match:
Andy Carroll vs His West Ham Donald Duck

In a further bizarre twist, Man City’s most prominent rockstar supporter, Mark E Smith from the Fall, has urged fans to stay away predicting a proletariat uprising before today’s game that would render events at Upton Park meaningless in the greater scheme of things