Newcastle vs West Ham Preview: A day in the life of Andy Carroll


[PHEW, relief for the verywestham team as the Interpreter arrives]


Well it’s Sunday morning and we are heading north for the big homecoming of Andy Carroll as the buoyant Hammers (managed by former Toon boss Sam Allardyce) take on a feisty Newcastle side (managed by former hammer’s boss Alan Pardew).


Andy takes over: As we are leaving I only just remember to bring along my lucky scoring boots - I lost them some time back during all the chaos with the Liverpool move – but luckily me mam found them last week amongst some discarded kegs under me bed back home in Newcastle…. 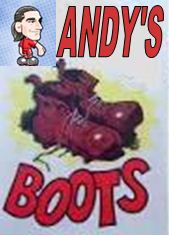 Keevan Nolan picks us up at 8ish…It gets a bit noisy cos the silly bugger’s gone and trod on one of the dancing girls from last neet that was crashed on the floor at my pad. Thank Christ for the long journey up – champion chance to catch up on some missed sleep! 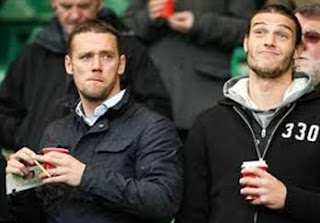 As we arrive at the ground some home fans have a warm welcome waiting for me. A reet classy Geordie welcome home for the prodigal son done well – I’ve played a stormer while I’ve been away – managing to single-handedly wreck Liverpool’s finances and make a mockery of the new management system at Anfield! Champion stuff! 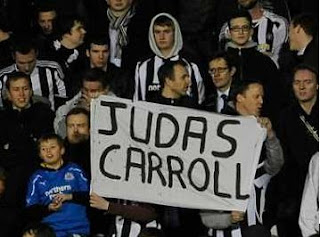 In the dressing room big Sam announces the team. Jack Collison bursts into tears at his omission. Joey O’Brien reminds him that he’s unavailable for selection due to injury. Matt Jarvis ribs Matt Taylor over his disappointing FiFA-13 ultimate team player sprint speed ratings. Carlton Cole cheers everyone up with some Killer Cole antics….


The game kicks off: they come at us for the first 20 minutes with the Demba-Papisse-Cisse-Ba doppelganger thing creating havoc for the commentators. Then  we get a free kick and I knock it down for Keevan to slot it home from 3 yards. The stadium’s gawn silent but for the unbridled joy of a few thousand bubbles boys. Champion!


Half time – Me mam has popped in and made us all a cuppa Geordie tea, with ham stotties and sherry trifle as an optional extra.


Out in the stadium some of the fans are finding the harsh weather tough to handle – some of them have been forced to attend matches naked as they have sold all their clothes to pay off Wonga debt. Hopefully they will benefit from the innovative scheme where you can get a free Newcastle shirt with every £5000 of Wonga debt. 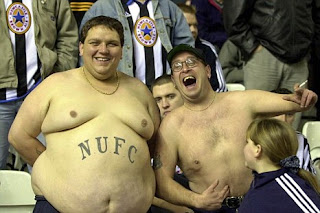 
Second half kicks off: They come at us but Mark Noble robs it and slips one through for Matt Jarvis who uses his pace to beat their right back and puts one across for me to tap in from 2 yards. Top goal!


Everybody notices how well Noble is playing except Roy Hodgson who is too busy watchin an Arsenal reserves training session in an effort to add to his ABN (‘Anyone But Noble’) list of unknowns to select ahead of Mark in the event of Raheem whatshisname or Jon Jack Shelving getting injured.

With ten minutes left the ironic ‘bring back Titus Bramble’ chants commence – now we know that we’ve won for sure. Big Sam forbids us from scoring a third – too showy…that’d be too ‘old’ West Ham rather than our all new relegation-proof model.


After the game the Bubbles boys head out on the toon with the foolish expectation that all Geordie lasses are as fabulous as our Cheryl. Champion! 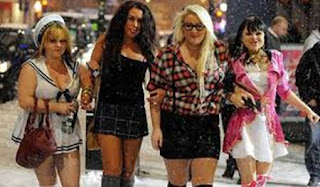