'Thou doth protest too much methinks'.

But who doth thou be? Chaz Austin's response to David Sullivan's comments during an interview with KUMB proviked an unusually robust protest from the wantaway QPR striker suggesting that there may well be some flames to go with that there smoke!

Noticibly, there was no denial that Mr Austin had failed a medical at Hull and, of course, there can be no denying that Chaz underperformed during the Queens and Park Rangers tussles with the mighty Irons lasy season, capping it off with a crucial penalty miss!

On the other hand, Sullivan is an undoubted shrewdster who has reopened debate about Austin's future just when QPR fans were daring to dream that he might stay at Loftus road and lead their charge for promotion back to the top tier. Two words for you listening Rangers....Jermain and Defoe. There's no point clinging to wantaway strikers who have International ambitions to chase.

Interestingly, the bookies still rate the Hammers as joint front runners to sign him at 7/4. The other favourites are Bournemouth who, after two gutsy 1-0 defeats, are learning how hard it is to get points in the Premiership. A predator like Austin could well make the difference between staying up or not for them. One suspects that once all the more attractive suitors have gone that the Cherries will strike. Austin started out with mon-league Poole and should find a south coast location attractive. 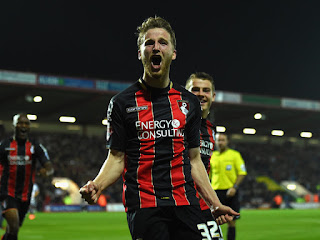 Meanwhile, the chief Austin-chasers fight it out for three points at the Boleyn today. The Cherries will be buoyed by the possible return of Harry Artur to their midfield where Derryman Eunan O'Kane will be looking to celebrate his call up to the Repuberlick O' Oireland squad with a good performance. For the Hammers, Adrian commences his ridiculous three match ban, while all eyes will be on the starting teamsheet to see if Reece Oxford starts. Our guess is that either Pedro Obiang and Manuel Lanzini will displace the starlet, but expect him to join the sction if the Hammers can get a two goal lead.

We predict another 1-0 defeat for the Cherties with Dimitri Payet enjoying a good day.
Posted by Verywestham at 03:36