Sakho's twenty goals: is that in both the Premier League AND Europa Cup? 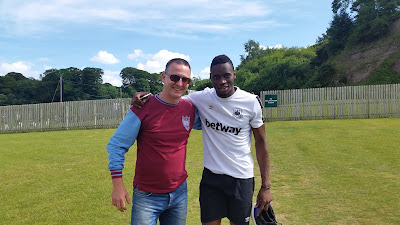 Man of the match Diafra Sakho opened his season's goalscoring account with a brace against FC Lusitanos. In fact, thr prolific Senegalese could have scored more as he missed two excellent opportunities before scoring in the 41st minute.

Diafra has vowed to score 20 goals or more this season, and tonight's tally will certainly get things moving in the right direction, but with three qualifying ties (i.e. six games) before the competition even starts in earnest, you'd have to wonder if he could get into double figures for goals scored in that competition alone!

Either way, the begrudgers will be very quiet tonight as the Hammers participation in the much-maligned competition was full of feelgood factors with a host of youngsters impressing, including Reece Oxford who at 16 is the youngest full team debutant ever for the Hammers!

One issue was that the energetic Mauro Zarate seemed to pick up a thigh injury before he was substituted.
Posted by Verywestham at 16:23