Davies in shock recall for Hammers 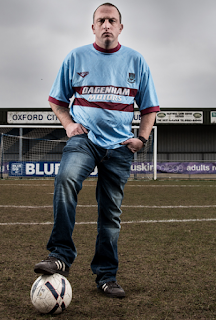 As the furore continues to grow around West ham's alleged slighting of Andorran superclub FC Lusitanos, news has emerged that in a peacemaking gesture the East London minnows plan to reintroduce a fans' favourite into the matchday squad for next Thursday's return leg.

The Hammers will be desperately trying to hold on to their slender three goal lead from the first leg and their chances would be considerably enhanced if they could snatch a precious away goal. 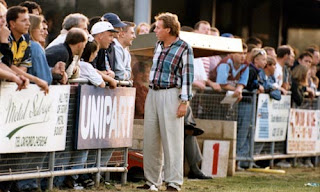 To that end it appears that they are planning to make an audacious swoop for ex-fan-squadinterloper, Steve Davies. Steve, who is no relation to the Romford-based snooker playing namesake, was 'signed' by gaffer Harry Redknapp during a pre-season friendly with Oxford United in 1994. 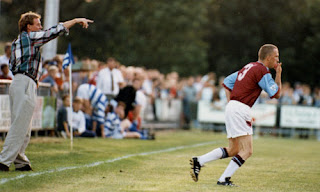 Unlike Marco Boogers, Davies was signed without Redknapp even watching a video of him in action! However, the crafty manager's faith was more than repaid when Davies scored the all important fifth goal in seven goal win.

Concerns have been expressed that Davies, who is now in his forties, might struggle with his fitness levels at this top level but a source confirmed that he is confident he can put in a shift and has been having a few kick abouts in the back garden with his kids to add that extra level of sharpness. He will be hoping to avoid the embarrassment of succumbing to cramp that befell several of the Lusitanos players in the first leg.

The Hammers will be hoping that this demonstration of how dangerous they perceive the Andorran's threat might appease outspoken manager Xabi Roura and his squad of salaried players.
Posted by Verywestham at 03:25