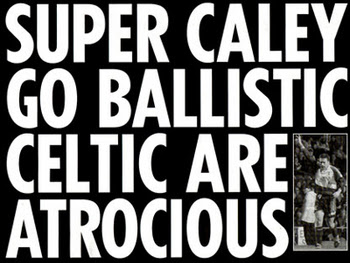 Ok, its not as good as the original Celtic bashing Jockball headline, but given that West Ham (or Birkirkara) will meet the victors of Inverness Caledonian Thistle vs Romanian Superclub Astra FC in the third round of the Europa League, we cud nae resist Morag!

The Romanians managed a 1-0 away win on Thursday and are clearly now the favourites. However, the highlanders will give it their best and a trip up North would be more fun than a jaunt across Europe to the Romanian-Bulgar border.

Add to that the terrifying nugget that the Romanians are nicknamed the Black Devils and its no surprise that most Hammers would turn a blind eye to the kilts and gladly embrace a trip up Ben Nevis.

Slaven Bilic's troops will need to watch out for the prolific Tichie Foran who has returned after 18 months of injury hell and could be the spark that reignites their European dreams!
Posted by Verywestham at 18:17