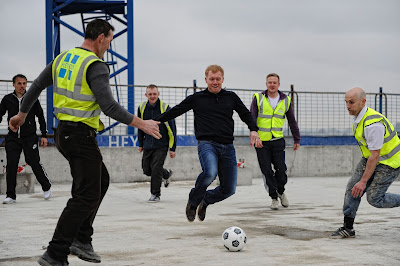 Just as the furore after the first leg of West ham versus Andorran giants FC Lusitania was settling,  sources close to West ham have moved to scotch emerging rumours that could further aggravate relations between the clubs.

It appears that the Lusitanic manager Xabi big balls was angered not only by Slaven Bilic's decision to observe the first leg mauling from the safety of the stands, but also was peeved by rumours that some of his part time staff may have used the fixture to try and pick up some work in the current building of the Hammers new magnificent Olympic Stadium! With plumbers and electricians increasingly difficult to find, the Lusitanian squad is a perfect recruiting ground as pressure mounts to complete the project in time for 2016.

Hammers sources have denied the rumours and also ruled out any likelihood that Jordan Dunn could get a call up for the fixture. Jordan, who narrowly avoided a lifetime ban from the Boleyn after coming on as an unlisted substitute during last season's Tottenham tie, is just the kind of set piece specialist who could settle the tie with one of his trademark banana kicks.

Otherwise, West ham will be hoping that their youthful side will be able to hold onto their slender three goal lead as the Lusitanians seek revenge for the first leg thumping. As an added incentive, they will be allowed to stop off at Eurodisney on the way home if they get the desired result in the Cauldron that is the Andorrans stadium where, after accomodating their managers hypersensitive and inflated ego, there is seating left for 899 punters.