Narky Nolan Edges towards the Exit 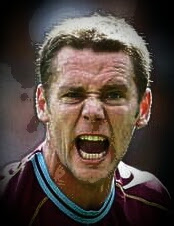 Since his arrival four years ago, Hammers fans have enjoyed a strange relationship with Kevin Nolan. Even the begrudgers would have to admit that as Allardyce's captain and on the pitch general he was a vital element in our promotion and initial bedding in as a Premiership club. However, Nolan's inherent style is based upon aggressive route one football where he imposes his presence by slotting knock downs and other 'scraps' - an approach that is decidedly different from the fabled West Ham way.

With the departure of big Sam it has seemed inevitable that Nolan would soon follow. However, with Allardyce enjoying a well earned break from the game, there is no natural destination for Nolan. His 'first' club Bolton Wanderers apparently expressed an interest, but were scared off by his wage levels. So far, an alternate suitor has not emerged. With just one goal in 29 appearances last season, many feel that his 33 year old legs are gone. Without the goals, Nolan has little to offer apart from leadership as his levels of mobility and passsing ability are not major strengths - shortcomins that have become an obsession amongst some sections of the faithful who have become embarrassingly vocal in their dissatisfaction with 'SuperKev'.

Watching his performances in the Europa league against modest opposition does not convince one that a drop down to Championship level will allow him to be a force once again. Moreover, with the new 4-2-3-1 formation favoured by Slaven Bilic, it's hard to see any role for Nolan at West ham. With a midfield that is likely to be drawn from Payet, Noble, Kouyate, Obiang, Lanzini, Amalfitano, with a host of exciting kids also looking for action (Poyet, Cullen, Oxford) there's no obvious role for our former captain.

Nolan has indicated that he wants to leave if he cannot get game time which, given the situation outlined above, is essentially a transfer request. Let's hope that the club can progress this tidily - Nolan HAS been a valuable servant over four crucial years but time is merciless and our perceived needs have changed. The Davids managed Sam's departure with considerable grace, let's manage the Nolan situation similarly.

Maybe the club needs to consider subsidising his wages elsewhere for the remaining year of his contract as his strong character could become a liability if he becomes idle in the squad. It would be a pity if what is essentially a very positive story of his time at the club were to end badly. We are bigger than that and he has been a good servant.