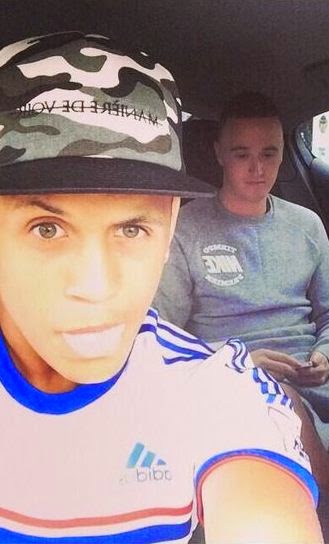 Even as Hammers fans relxed to watch the spectacle of the Brazil vs Chile World cup second round encounter, shock revelations were emerging that Chelsea are plotting their latest raid upon the West Ham ranks. The unfashionable but vulgarly-rich West London club are said to have tapped up young Ravel Morrison by giving him a free Chelsea training top!!!

It seems the allure of South American footie may have overcome the pensioners and as Morrison is currently the most-South American-like English footballer, he represents  the perfect signing to appease the avaricious Chelsea  fan base.


Howeve, the top is in fact not a Chelsea garment as it has a red-blue stripe combo at the bottom of the sleeves that differs from the pure blue of the Chelski merchandise. After extensive research it has been identified by our top Kit analysis team as a Costa Rican training jersey – simply revealing Ravel’s leanings for the current world cup.
Meanwhile, it has also been revealed that Hammers netminder Adrian has been practising in a Leeds kit – thus ensuring he gets lots of shot-stopping practice, while instead of going to France on holidays, Mark Noble has opted to dress down in some Noocassel training gear - or according to other speculation has finally got fed up waiting for an England call and opted for Germany. In other news, it appears that some Hammers may have been moonlighting for Turkish side Trazbonspor!

Meanwhile in Brazil, Ex-Hammer Javier Margas, also an international hair-styling consultant, has damned Dani Alves ‘effort’ by labelling it "El caniche que está muerta" (que murió después de que ha estado funcionando en el barro) – which loosely translates as ‘the dead poodle who died after rolling in some mud’!
While such name calling is hardly to be encouraged, perhaps on this occasion young Alves might benefit from considering the ‘advice’ as his hair cut really sucks! Luckily, on field for Chile is Vidal (Sassoon) who might be able to do a quick patch up for him before the penalty shoot out!