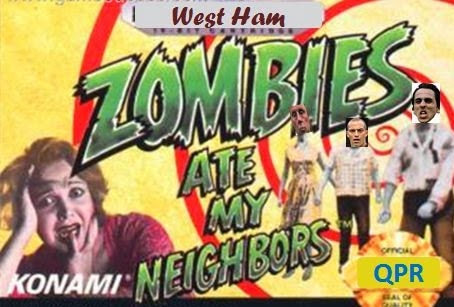 With the Hammers on weekend leave, attentions for the seriously addicted fans turned to matters related, including the performance of on-loan and ex-Hammers. Down in the Chumpionship, it’s hard not to notice that West ham are clearly running a ‘development’ squad of players returning from the terrible injury trauma of being transferred to a lower club.


As QPR pushed for a rattle at promotion to the playoffs, their efforts were massively assisted by the efforts of Rob Green, and goalscoring Yossi Benayoun, Bobby the Z-man, and on-loan Raveldo Morrison, as they romped to a 5-2 victory over Nottingham’s florist, who’s best player was Henri Lansbury, another one who’s bubble has burst. With Maiga and Gaz O’Neil waiting in the wings, it’s a veritable Hammersfest at Lofty road.


Managed by ex-Hammers Head Honcho, Honest Harry Redknapp, the Queens and Park Rangers look set for a play-off scrap where history dictates that the team finishing third (VWH’s prediction for QPR) do not make it. This would probably be good news for West ham as it would force Ravel Morrison to return to the Boleyn in search of Premiership action. His star is rising and clearly he is wasted upon the past-it kickers and never-quite-made-it tryers of that division.


In other news, poor Jack Collison missed a penalty as the Gooners of Middle Arse slipped past Wigan in a penalty shoot-out that decided their FA Cup semi-final. In better news, Tragic Sheffield United, now in the third tier despite receiving gazzillions in compo from West Ham for theTevezgate affair, also saw their gutsy cup run squashed as they lost 5-3 to Hull City (NOT) Tigers. Meanwhile, those likeable rogues at Millwall could only muster a draw at home to Watford and look set to drop to League one (i.e. their natural habitat in the old Division three).

Oh! and Cheating Chico got found out and red-carded after a meer 16 minutes in possibly a season-defining moment for plunging Swansea. I guess that'll be a three match ban just when your team needs you most Mr Flores. What goes around deblah......


“In Haitian folklore, a zombie (Haitian Creole: zonbi) is an animated corpse raised by magical means, such as witchcraft”. ……..Is this Harry’s latest piece of mischief?
Posted by Verywestham at 23:21