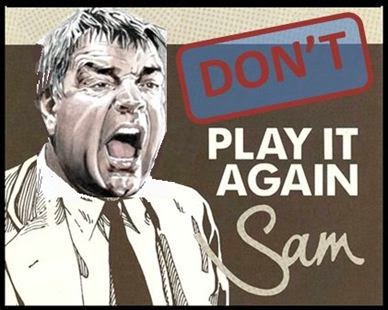 Sam Allardyce’s fondness for using statistical analysis to inform his footballing strategies may have finally come back to bite him as the results of a MASSIVE online poll indicate that 77% of West Ham fan’s think it is time for managerial change.
Over 12,000 fans participated and indicated a desire to abandon the Allardisi way for look for a more open and entertaining style of football - traditionally referred to by football fans as THE WEST HAM WAY.
The survey ran from Thursday and closed at 7pm on Sunday 27 April. It is thought to be the largest 'opinion poll' ever undertaken of a club's supporters.


Of those who voted, almost 5,000 left comments, the most repeated of which were:
* We should thank Sam for what he has done but he is not the man for the future of the club.


* Sam's style of football is too one-dimensional. There is no plan B and he is adamant that he will not consider changing his style.
Another dude who liked his computers was Steve Jobs who is credited with saying; “time is limited, so don’t waste it trapped by the dogma of other people’s thinking. Don’t let the noise drown out your own inner voice. Have the courage to follow your heart and intuition”....Indeed!
One can sense that the fat lady is starting to clear her throat and won’t be singing ‘Play it again Sam’.
The conclusions of the poll have been sent to David Sullivan.
﻿
Posted by Verywestham at 03:25