Hammers in last minute swoop for Lampard and Zamora! 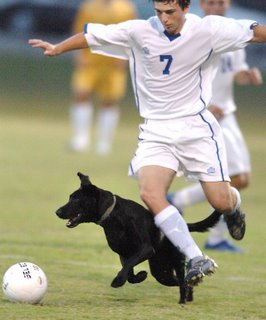 Recent events down in the Championship have served to highlight a new source of footie talent for panic-stricken premiership clubs to tap into during the January desperation transfer window. Rex ‘crazy dawg’Widdlespoon injected a sense of real excitement to an otherwise dull Rothersnore United versus Comatown Athletic League Two match by seizing possession of the match ball and going on a mazey Giggsian run for all of 4 minutes before the Rothersnore keeper managed to dispossess him with an outrageous challenge that went unpunished by the match referee!

Hammers boss, Big Sam Allthedice, upon learning of young Rex’s acrobatics,has immediately diverted his scouts in search of similar canine talents. Early indications are that the Hammers may have hit the jackpot as some former Upton Park favourites are unexpectedly out of contract and readily available should Big Sam decide to swoop!!!

A small minority of Hammers fans were disappointed when recent efforts to re-sign Frank Lampard Junior proved unsuccessful, but will be delighted to hear that the other (much less arthritic) footballing talent of the Lampard family is readily available and straining on the leash for a bash at Premiership football.

In even better news, the Zamora family name may also soon be back where it rightfully belongs on the Hammers team sheet as young Zeus Zamora (or ‘ZeeZee’ as he is likely to be called by Hammer’s fans) is also available on a free transfer and would be likely to accept a minimal remuneration package comprised of dog nuts and a promise to allow him to hold on to his match balls.

Ecstatic fans have commented how these signings can re-ignite the longstanding Hammers tradition of promoting canine talent through its much admired kennel-like academy system. Previous graduates include the tenacious midfield stopper Martin ‘Mad Dog’ Allen who is well remembered for adding much needed bite to the Hammers midfield in the early 1990s

Moreover, the signings would be likely to bring back to the Boleyn some disgruntled fans who have drifted away from the club due to a perceived lack of representation of local talent from previous feeder clubs clubs such as Dogenham Rovers and Barking FC.

Other sources see the signings as an ideal antidote to the clubs perceived recent over-reliance upon hoofing the ball up in the air, as these new signings are likely to impose a style that requires that the ball remains at ground level.

Meanwhile, in other transfer news, the trend for canine signings seems to be catching on as various Premiership clubs unleashed new signings this week…