Mixed News for Hammers in Premier League run in

After three big wins in a row it's truly game on for West ham as they push for a Champions League spot that would likely generate £50 million-plus for the rapidly rising club! With just nine games to go the Hammers are a point off Man City in fourth and with the Gooners stuttering, anything looks possible!

Meanwhile, the statsgeeks at footballwebpages.co.uk have put akl available data into a supercomputer to predict a final table. Hammers fans will undoubtedly be delighted with the predicted 4th place finish, but their celebrations might be tempered by the fact that the computer reckoning is for arch-rivals Spurs to nobble Leicester on goal difference for the title...perish the thought!

Interestingly, although the bookies rate Arsenal as the side most likely to buckle during the run in, the computer reckons that Man City will slip behind the Hammers. 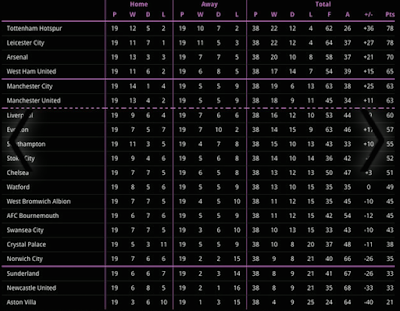 However, with 9 tough games to go, West ham would need to win four, draw 4 and lose just one game if they are to reach the predicted 65 points haul.

Meanwhile, both Newcastle and Sunderland are predicted to make the drop, with Norwich scraping home in 17th. Big Sam 's love of statistics may thus be a little dampened but, in all honesty, most Hammers fans would bet on Sam keeping Sunderland up.

Beware: computers know nought about injuries and a simple hamstring or calf tear to Dimitri Payet or Harry Kane could massively change all of this. All the same, it's great to be in this position...dream on Hammerheads!