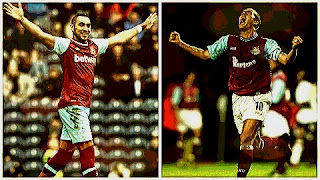 As Happy Hammers prepare to soak up the party that will be Mark Noble's testimonial on Monday, it has emerged there will be one disappointment. After a season of scintillating form - characterised by an unusual combination of out of this world skill and hard graft for the team, France outcast Dimitri Payet has been handed an olive branch call up by French national team manager Didier Deschamps.

Sadly, his return to International duties will prevent Payet from appearing in Captain Claret's testimonial. Fans will thus be denied the mouthwatering spectacle of seeing a Payet vs Di Canio football face off!!!

However, with the line up to include a host of Hamers heroes from the past, this is truly a party that any diehard Hammer will want to be at!