Ravel Reverse as Harry left with egg on is face!

The whole Ravel Morrison going out on loan to QPR business has been a weird saga that has dragged on and on and thus created a vacuum of rumour and counter-rumour. In all the talk about disputes over agents, exaggerated groin strains and dissatisfaction with his 'miserly' weekly pay packet, nobody has thought to consider what is really ailing the troubled youngster.

After careful consideration of all the facts of the matter, it appears that the real problem is that Ravel doesn’t like the Hammers current away strip. The bland white affair really doesn’t match up to the traditional alternative - majestic sky blue with double claret breast hoops - that has become a footie fashion icon over the years. We can only imagine the frustration that any young soccer dandy might experience when, having signed up for East London’s finest, to then be cruelly denied the opportunity to strut their stuff in the sartorially elegant away outfit! 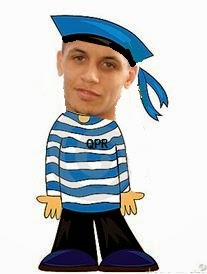 Not exactly "Gangsta" is it?
And it is on this very issue that the much-mooted Fulham transfer floundered, as their home strip is undoubtedly among the most banal in world soccer. Now, apparently within hours of making the switch to QPR, comes the realisation that the prison garb that Joey Barton and Co turn out in is utterly disagreeable and, by virtue of it’s horizontal stripes, makes one look more rotund than the effect that a vertically striped equivalent would achieve. Even worse, when he realises that the blue hoops are ‘royal’ rather than ‘navy’ blue, all hell will break loose. 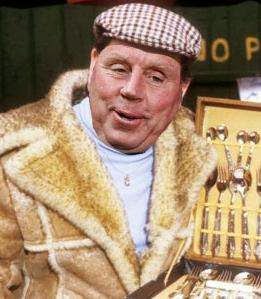 For Harry Rednapp, the Morrison affair could provide a chance to show what he could have achieved as England National team manager. His popularity was based mostly upon his perceived ability to ‘communicate’ with the spoilt brats who pose as top soccer stars these days (it certainly wasn’t due to his tactical nous). Having tamed Joey Barton into wearing an Ena Sharples-style hair piece, anything is possible, but his comments about Ravel kick-starting QPR’s season will surely come back to haunt him. Automatic promotion? – they could struggle to make the play offs!

And a word of warning to Morrison; when it kicks off don't expect Harry to be a discrete as Sam et al have been. It looks like we are set to finally hear what those 'attitudinal problems' really are!
Posted by Verywestham at 00:26