Right now just about anybody could get the attention of Hammers fans as a potential candidate to replace Big Sam in the hotseat. The most recent name linked with the position is little known Ukrainian Viktor Skyrpnyk who currently manages Werder Bremen. We know nothing about him whatsoever, but he's now in the running, apparently.

As the race (sort of) hots up, Moyes and Benitez remain front runners, while interest in Steve McClown has apparently cooled. One report even suggested that ex-Hammer's forward Serhiy Rebrov (2004: 27 games with one goal!) might take over! At VWH we still think that Slaven Bilic will ultimately take the job, but if he doesn't then we expect another Redknapp pupil to step up and take on the role... 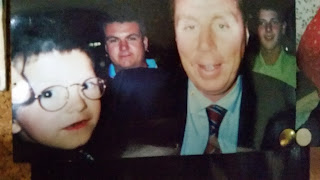 This shot, taken from 1999 outside Parkhead, provides more than adequate evidence of a possible link with the manager's position at West ham that justifies James 'baby' James' inclusion in the betting with odds of 100Foinavons/1.