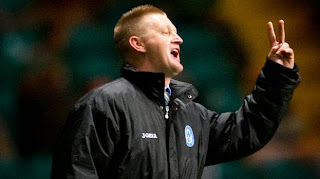 With the departure of Sam Allardyce straight after yesterday's Premiership finale, all eyes are on West Ham to see who will take up the hotseat at what the club has labelled "currently the most exciting job in football".

With ex-Hammer Slaven Bilic the firm favourite with the bookies, thee has been surprisingly little focus on another of the club's alumni - former captain Steve Lomas.

Having had hugely successful stints with the Saints at St Neots town and then St Johnstone, Lomas then excelled with a stint at the sinners of Millwall FC where he delivered a superb 25% win rate during his six month reign.

Unfortunately, the Saff London 'Lions' found the bright lights of success too much to handle and duly sacked the Claret n Blue hero - no small part in the chaos that has subsequently resulted in their tragic relegation to the third tier.

With such an awesome record of loyalty to the Hammers cause astute observers see him as a mere shoe-in for the gaffers job at Fortress Boleyn!
Posted by Verywestham at 12:35