Is Romelu Lukaku in League with the Devil?

Saturday's match between West Ham and Everton has caused a stir as the Wicked Curse of the Toffees was once again in evidence. Unbelievably, the Hammers managed to throw away a leading position during the evil mist of injury time awarded by referee Kevin Fiend. But, even as Romelu Lukaku lapped up the plaudits for stealing the winning goal, concerns were being expressed by many Hammers fans regarding "almost definite evidence of possible foul play and demonic trickery".

Having set a new record of scoring in every of his six games against West Ham (Six goals in Six games for Six efforts.....isn't anybody seeing the connection?), questions have been posed as to how a usually average striker can suddenly discover such Robert Johnson-like abilities!


Jeremy Brownpoodle, a well known exorcist from the west Essex region, has been commissioned to investigate the fiendish happenings - "We are all aware of the rumours about Everton and Satan Baines free kick wizardry, but these latest happenings suggest a further rise in use of the occult in the Everton team since Roberto Martinez arrived". 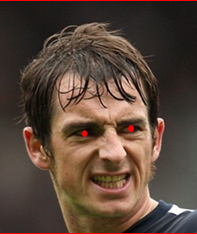 Speaking exclusively to our spiritual affairs correspondent, Brownpoodle illuminated the whole Satanic process for Hammers fans - "People think that there is just Satan, but in fact there are many demons each of whom has a theme to their trickery. While Satan is the Prince of witches and warlocks, Beelzebub trades in envy and gluttony, Lucifer is the dark prince that pedals excessive pride, while Belial is the inventor of evil things. It seems that Everton are behoven to many of these evil forces and their punishment is likely to be that they will serve as underlings to their neighbours at Anfield". 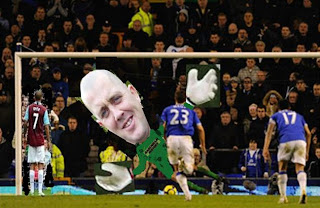 This was later followed by the grotesque events around the Di Canio ‘fair’ play award, where our top striker was suddenly possessed and decided to forego the opportunity to stuff the Toffees so that the Everton keeper could tie his shoelaces up after they had tragically come undone mid-action!


And this season has provided yet more damning evidence of witchcraft or similar tomfoolery, with two bizarre and undeserved victories for Everton against West Ham…Not surprisingly, many Hammers fans have described Saturday's performance as diabolical!!!
Posted by Verywestham at 04:38