Burnley and West Ham: Sharing the Claret and Blue 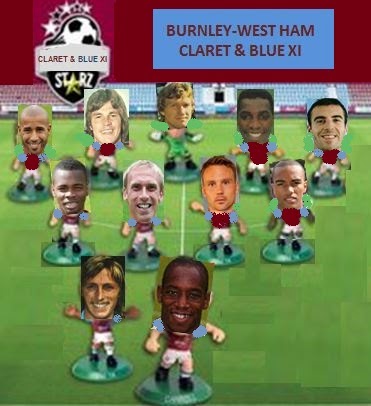 Goalkeeper:
Gerry Peyton – who started out at Burnley (30 apps over 2 seasons) before being snapped up by Fulham where he enjoyed a decade of consistently good performances before moving on to continue at Bournemouth. Bounced around after that, including an 11 game spell at the Boleyn in 1993-4.
Defence:
Tyrone Mears: Managed just five appearances for West Ham after his Summer arrival in 2006 but did better when he moved to Burnley (via Derby County and Marseille!) where a couple of good seasons ended with relegation and a move to Bolton in 2011.
Mitchell Thomas: Never quite lived up to expectations after arriving at West Ham from Tottenham in 1991 and was let go back to his home town clu Luton after a patchy three years. Joined Burnley when Luton ran into financial trouble and put in a decent 99 game three year spell before retiring in 2002
Joe Gallagher: A domineering old-style centre half who enjoyed years of success at Birmingham but was crocked by the time he arrived at the Boleyn and soon after was offloaded to the unsuspecting Burnley where he served mainly as part of the training staff!
David Unsworth: Lengthy career that took in a variety of clubs – mostly Everton and then Everton again!- that included West Ham (32 apps – 2 goals) and Burnley (29 apps – 1 goal) each for a season.
Midfield:
Luke Chadwick: A graduate of the Man United academy who didn’t quite make it at the highest level - enjoyed a season on loan at Burnley in 2003-4 before being signed on a free transfer by the Hammers where he dipped in and out of the side for two years before moving on. Best spell was for five years at MK Dons and has now movedon to finish out his career at hometown club Cambridge United.
Junior Stanislas: Once the next big thing at west ham having developed through the academy from age ten, junior is a skilful player but never quite achieved the required consistency for the Premiership and was an early casualty of the Big Sam regime who was offloaded to Burnley in 2011. Left for Bournemouth last year despite being offered a new contract. Still only 24 but definitely in the underachiever category!
Zavon Hines: Pacey and, on his day, an exciting attacking threat but poor Zavon’s career has been blighted by injuries. 22 Hammers appearances before he joined Burnley in 2011 but couldn’t get first team game time and has drifted ever since. Now at the Daggers but sadly out with injury again. We will never forget watching him terrorise Liverpool in 2009.
Matt Taylor: Classy performer with a cultured left foot. Much travelled but a committed pro for all of his clubs. Hammers will always be grateful for his through pass that changed the play-off final three years ago! Doing well for Burnley since moving in the Summer but is (thankfully) injured for today’s clash.
Up front:
Alan Taylor: Arrived at West Ham from mighty Rochdale where his modest goalscoring record provided little clue as to what was to follow as Taylor went on a sensational goalscoring spree that included a brace in the 1975 FA Cup final! Never quite sustained those dizzy heights and succumbed to injuries. Put in a decent two years at Turf Moor between ’84 and ’86 where in 64 games he scored 23 goals.


Ian Wright: Some Hammers fans were sceptical when the 35 years old Wrighty arrived at Upton Park in 1998 but after 15 years of goal scoring mayhem at Palace and Arsenal he proved still able to find the net on a regular basis. His powers had dwindled still further a year later at Burnley and finally he had to hang up the boots and move on to punditry – where he is also a top performer!
Posted by Verywestham at 02:59