Who wants to get rid of Sam now? Six months on from the fans poll Allardyce is laughing his socks off! 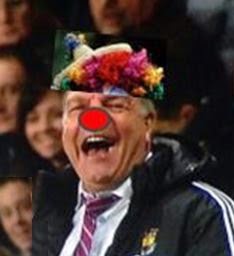 Here we are just six months on from the poll of fans in which 80% of the 13,000 West Ham fans who responded indicating that Big Sam should be sent on his merry way to allow for a return to the much lauded “West Ham way”.

The poll was also supplemented by fan’s comments – with one fan capturing the principal recurring theme that:

“Sam's style of football is too one-dimensional. There is no plan B and he is adamant that he will not consider changing his style”.

The board received the results and we waited their response. One thing for sure about the David’s is that they are VERY media-sensitive, and if anything sometimes overtwitting on twatter!

And their response duly arrived – to many fans disappointment we were informed that Sam would be staying and that a new coach would arrive to bolster our attacking efforts. Many viewed this as a fudge.

Then Andy Carroll got injured and we managed to throw away a winning position at home to Spurs. Grrrr. Inevitably, the calls for action returned. Sullivan and Gold held firm-ish.

Then unexpectedly we suddenly morphed into the current swashbuckling outfit that is not just delivering open, attacking and VERY EXCITING football, but also getting results!
We lie fourth in the table this morning – and with a little luck we could be even higher! It’s nice to genuinely look forward to playing the bigger clubs knowing that we can really compete with them. The cup embarrassments against Man City and Nottingham’s Florist seem a long time ago now!

So Folks, aren’t you glad Sam put up with our carping, including some OTT abuse from some sections amongst us?

On behalf of VERYWESTHAM we want to say a big Happy 60th Birthday Sam – and in particular thanks for:

(1) Rescuing our beloved club who were in freefall when you arrived.
(2) Ejecting the underperforming and overpaid brats who had taken over the squad.
(3) Getting us back to the Premiership at the first time of trying.
(4) Establishing our position as a stable Premiership club with mid table finishes over the past two seasons.
(5) and most of all........Reintroducing the delightfully entertaining football that binds us as a group of fans who believe in their club and are passionate about its footballing philosophy.