Diafra Disappointment as Scoring Run Fails to Extend to Europe 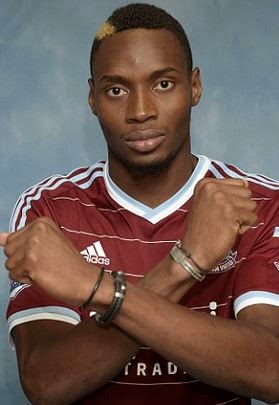 After a sensational record breaking run of scoring on six consecutive footballing outings, including West Ham’s last five Premiership fixtures, prolific striker Diafra Sakho’s could not maintain his scoring run last night despite a series of Champions league fixtures. Even as Shatkar Donetsk slipped seven goals past mighty BATE Borisov and Bayern Munich pelted Roma 7-1, Sakho failed to appear on any of the night's scoresheets and couldn’t even muster a shot on goal all evening!

eX BBC footie icon person Alan ‘hint of the darkness’ Hansen jumped to Sakho’s defence “personally, I think it’s a wee bit harsh to judge the lad’s performance on a game he hasn’t actually played in” emphasising why BBC chiefs had to axe the non-committal and overly conservative filibustering Scot from the Match of the Day line up.

Cronic Bubbles-watcher, Les Windybottom, was not so reticent in expressing his viewpoint “It’s a pity his freescoring record came to an end on a Champions league night and during such a big tie as between Barcelona and Ajax” he further hit the nail on the pointy end in his observation that “Ultimately, Sakho may turn out to be like so many former Hammers strikers who just don’t turn up for the big games”.

Hammers next opponents, the hirsute Man-chested City, enjoyed another night of Eurovision success picking up a valuable point away to CSKKK-Moscow that should help them in their efforts to claim third place in their Champions league group and a free ticket to the much loved Europa Cup competition that is especially designed as an outlet for the oversized squads of Europe’s more grotesquely affluent clubs.

West ham will take encouragement from the ease with which Moscow cancelled out a two-goal head start for City who are said to be totally exhausted from their efforts and the really tiring trip home. In particular, poor Sergio Aguero was forced to play a full ninety minutes in the snowy conditions by beastly Manuel Pellegrini and is thought to be doubtful for the trip to Upton Park at the weekend.


“It’s time that Sakho delivered a decent match haul to improve on his mere goal a game average with at least a brace against City next weekend” concluded Windybottom before tucking in to a delicious slice of Battenberg cake.
Posted by Verywestham at 07:47