An audience with Allardisi: Verywestham meet the big man to talk tactics

Ok, so lets be clear, it’s fashionable to blame the entire ills of your club on the manager and evil board (as well as the FA and a variety of intergalactic conspiracies involving Manchester United, Sheffield United and the Zorgians). In all honesty, although this is pretty lazy logic, it usuallty rings true as there are few areas of endeavour that are as blighted by the incompetence of enthusiastic amateurs. For ‘family club’ one can usually read ‘bumbling myopia with limited business acumen’.

However, at camp Boleyn these days Hammers fans are having to find easier dogs to kick as everywhere you look there is a sense of professionalism – right from the careful planning of match tactics, patient building of a sustainable business model and playing squad, determined progression towards a larger theatre to both spread the love and gather enough income to finally put an end to our status as a feeding club for bigger clubs with perennial European responsibilities.

So, with all that in mind, off we headed to meet Big Sam for dinner at the Silver Springs hosted by Cork City FC. First up, Corkonians are known for not holding back on the carping if circumstances so permit – but right throughout the club and city folk were singing the praises of the visiting Hammers contingent for their professionalism, availability and plain good manners. Having encountered the Davids in public it isn’t hard to see how they infuse their organisation with a sense of responsibility towards their supporting constituency. Meeting Big Sam leaves one in no doubt that he also expects his lads to conduct themselves in a manner commensurate with their status.

In Ireland we are privileged to have a sports media that operates with no small amount of straight talking. Compare Giles, Brady and Dunphy with their equivalents on match of the day or even Sky sports. We encourage true opinion, even if it is provocative, and expect our sports people to roll with the punches. It was a real surprise to note how candid Allardyce is – politically astute but pretty direct all the same and he didn’t mince his words when asked for an opinion. 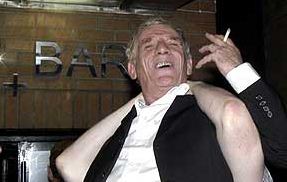 First up, Sam ain’t no Northerner – actually he hails for the West Midlands and is from Scottish stock. He supported Wolves as a boy (nobody felt inclined to salt up the wounds of recent troubles at the Wanderers who face third division footie next year). He retains a special relationship with Bolton but is enjoying his time in London. Operationally, he speaks on a daily basis with the board and it’s pretty clear how the responsibilities of business and football are divided!
Big Sam really goes for the ‘science’ around football and can readily cite yards covered, crosses made, saves etc etc as evidence for the Allardyce methodology. Hammers fans will be delighted to hear that with 6-8 more goals and a similar defensive record we can crack the top eight next year. All possible if Andy Carroll gets the 15 goals that Big Sam expects from him next year – and on the evidence of last season, if he stays fit why not?


He recalled his time in Ireland with great fondness, describing the crazy chaos of managing a club that financially stumbled from week to week after the club bar (and it’s principal source of income) was lost in a fire. Driving around Limerick with Fr Joe Young collecting in order to keep the team afloat was surely a hairy experience at times but Sam was keen to see it through until they were promoted before leaving for ‘different’ footballing challenges.
Perhaps the most challenging question for Big Sam came from Verywestham’s youngest pundit – Rory Meagher (aged 10) who was keen to hear how Big Sam will develop his team around young Dan Potts ever improving talents? Sam responded by explaining how Dan has overcome childhood leukemia but still warrants a bit of minding that Winston Reid, amongst others, is especially equipped to provide. 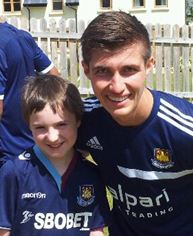 As for Big Sam’s aspirations over the coming years – at 58 he has a few good years left and is keen to spend them progressing the project that he took on with West Ham – it sounded like he considers this a bigger opportunity than any possible temptation from other jobs that might be offered to him – even England manager!!! At least Mark Noble would have a decent chance of getting the well overdue call up to International duty. Either way, it’s clear that Allardyce sees bringing this club to the Olympic stadium as the major challenge for him over the next few years – we wish him every success – and from the Verywestham crew, Sam you’re a true gentleman!
Posted by Verywestham at 15:25