Slaven: At least it wasn't another Wrexham! 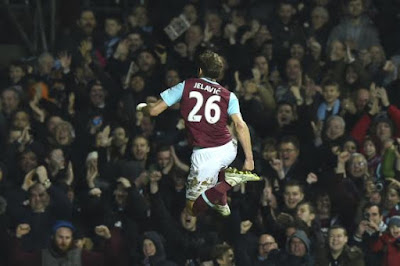 Slaven Bilic was his usual honest self after a drab 3rd round FA Cup tie versus Wolves where his stifled Hammers sneaked a 1-0 win.

The goal came in the 85th minute by virtue of a Nikica Jelavic strike after good eork from Payet and Carroll - thus converting perhaps the only decent opportunity in the game.

Bilic commented on the challenge of breaking down well organised opposition, reminding everybody of the embarrassing defeat to Wrexham back in 1997.

Bilic was centre back in the Harry Redknapp managed Hammers who succumbed to a 90th minute sucker punch goal from Kevin Russell.

And so the FA Cup dream continues. We are such a distance from the Allardyce era when the cup was viewed as a nuisance that had to be endured rather than enjoyed.

Upwards and onwards!
Posted by Verywestham at 11:05

Email ThisBlogThis!Share to TwitterShare to FacebookShare to Pinterest
Labels: Wrexham