The excitement is certainly building ahead of Mark Noble's testimonial at Upton Park on Easter Monday.

Inevitably, as the inclusions in the Hammers allstars are announced, attention is turning to those not yet confirmed but whom fans would dearly love to see turn out on the hallowed turf for one last time.

One such legend is nineties midfield maestro Ian Bishop. Bish played almost 300 games for the Hammers between 1989 and 1998 and with his precision passing typified the much lauded 'West ham way'. 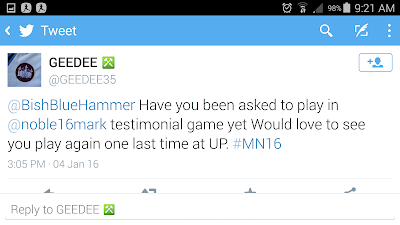 Bish has lived in the US for many years and is currently head coach for Evergreen FC in Leesburg, Virginia. Contacted on twitter earlier this week, Bish left no doubt about his willingness to appear if he gets the call. 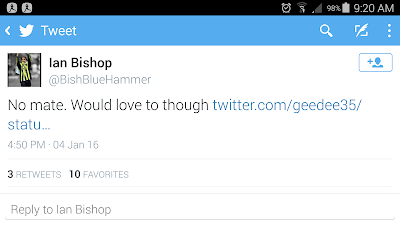 Undoubtedly Bishop would be one of the first names mentioned by fans if asked to identify top Hammers in living memory, but interestingly, he never received a Hammer of the year award and is thus not among the 33 living HOTY specially invited to the final game at Upton Park later this year.

Equally bemusing is that Frank McAvennie also never made HOTY as he was beaten into second place by Tony Cottee in 1986.

Let's hope we get some chance to see the Bish again before the Upton Park era comes to a close. Now 50, he remains in good shape and one suspects could manage a half an hour cameo role to keep the older Hammers faithful happy in the testimonial.

The latest ticket news from @noble16mark is that there will be tickets available to purchase in the next week or so.
Posted by Verywestham at 02:52