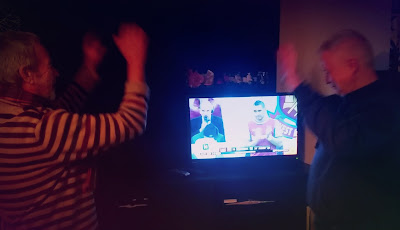 Saturday's drubbing of Klopp's flopps was a most pleasing occurence, made all the better by the return of chief creator Dimitri Payet - a moment that brought smiles to Hammers faces all around the world.

We at VERYWESTHAM were perfectly positioned to capture the moment with the North Tipperary Hammers supporters club president and chairman - Trevor & Robbie. The duo, otherwise known as Ballina's Derek and Clive, were so moved that they engaged in a complex bowing ritual to greet the East End Maradona back into the action.

Payet, for his part, responded by performing a triplet of reverse stepover twirls to bemuse and befuddle the Liverpool defence- much to the amusement and titillation of the Tipperary supporters.